A false dilemma presents a choice between two mutually exclusive options, implying that there are no other options. One option is clearly worse than the other, making the choice seem obvious. Also known as the either/or fallacy, false dilemmas are a type of informal logical fallacy in which a faulty argument is used to persuade an audience to agree. False dilemmas are everywhere. They can be deliberate or accidental, but their goal is to make their argument convincing. 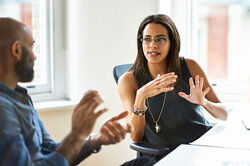 Politics use many logical fallacies to persuade the public. These fallacies often veer into political propaganda, which uses emotional appeals as arguments. Here are some examples of false dilemmas that limit a citizen’s choices.

Most advertisements use multiple logical fallacies for one reason: they work. If people are afraid of being unpopular or unattractive, they are more likely to fall for fallacious arguments. Read these examples of ways that companies use false dilemmas to sell something. Many of these messages are implied, if not stated outright.

These questions are emotionally loaded, making them inherently flawed. However, “would you rather” games can be fun when players must choose between two equally pleasant or unpleasant experiences. For example, “Would you rather sleep on a porcupine pillow or wear shoes made of slime?”

Sometimes it’s necessary to narrow choices down to two – if the choice is genuine. Presenting listeners with a limited number of choices can be an effective way to move a decision along. Some helpful uses of false dilemmas include:

While these examples are technically false dilemmas, because they ignore many other options, they are ultimately beneficial for both speaker and listener. Often, having too many options leads to analysis paralysis, which can hamper decision-making just as much as a logical fallacy.

How to Respond to a False Dilemma

When presented with a false dilemma, consider whether those two options are really your only choices. Determine whether refusing one option will inevitably lead to the second option. If you are presenting yourself with a false dilemma, such as “I must lose 10 pounds or no one will like me,” practice positive self-talk to think through alternative options.

Next, as in any argument, consider the speaker’s purpose and point of view. Are they trying to convince you to do something by offering a false choice? Is making this decision in your best interest, or in theirs? If it is indeed a false choice, call them out on it by naming a third option.

What’s the difference between a false dilemma, a false dichotomy, and a false analogy?

A false dichotomy indicates that two options are opposites. It is a type of false dilemma, which uses these limited options to persuade a listener to make a faulty choice. The terms “false dilemma” and “false dichotomy” are often used interchangeably.

Example: You can either get married or be alone for the rest of your life.

False dichotomies are related to false dilemmas because they both prompt listeners to choose between two unrelated options.

Another related type of logical fallacy is a false analogy. False analogies inaccurately compare two items as completely related when they might be only slightly similar. They are a form of inductive reasoning that discounts nuance in their conclusions.

False analogies are different from false dilemmas, because they are using faulty comparisons to lead an audience to a conclusion.

When forming an argument, it’s important to make your case clearly and persuasively. Learn more about the types of logical fallacies to avoid, including straw man arguments (which distort an opposing claim) and slippery slope arguments (which bring a premise to a faulty conclusion).