Civil disobedience has played an important role in history thanks to those who believe violence is not an option. The definition of civil disobedience is “breaking laws, usually in a non-violent way, as part of a protest” against laws deemed unfair or that infringe on human rights. Remembering these famous examples of civil disobedience can give the world hope that change is possible, but not guaranteed, through peaceful means. 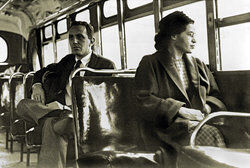 Some of the most successful famous acts of civil disobedience involve well-known civil rights leaders. You’ve probably heard of at least one person who is famous for civil disobedience, but you can find numerous examples of successful acts throughout history all around the world.

In 1955, Rosa Parks acted alone and almost spontaneously in taking a quiet stand against segregated bus laws in Montgomery, Alabama. As Parks sat in the front row of the black section at the back of the bus, she was asked to give up her seat to a white man. Parks politely refused.

As a member of the National Association for the Advancement of Colored People (NAACP), Parks knew there were plans to challenge bus laws and took this opportunity to make her own point. While Parks was arrested for her refusal to move, her action sparked bus boycotts that lasted over a year and resulted in a change to the bus segregation law in 1956.

Although salt production was lucrative in India, only the British were gaining from the resource. Their laws forbid Indians from selling salt independently and required that Indians pay a premium for salt that wasn’t even from India. Mohandas Gandhi wasn’t the first to protest the salt tax, but he did give it more visibility than others had.

In March 1930, Gandhi and a couple dozen followers marched for 240 miles, sharing their thoughts on the unfairness of the salt tax with every town they passed. The salt march, or satyagraha, lasted months and gained such a huge following that 60,000 people ended up in jail for their participation by the year’s end.

In early 1931, Gandhi reached a truce with British leaders, called the Gandhi-Irwin Pact, which released all salt march prisoners and allowed Indians to make salt for domestic purposes.

The March for Jobs and Freedom

In 1963, A. Phillip Randolph, Roy Wilkin, Dr. Martin Luther King Jr., and other civil rights leaders helped lead the March for Jobs and Freedom. Also known as the March on Washington, the protest was in an effort to eliminate legal racial segregation in the U.S. About a quarter of a million people joined the rally for a peaceful demonstration.

The march was one factor that aided in the passing of the Civil Rights Act in 1964, which made it illegal to discriminate against black people for things like hiring, public transportation, and education.

It may be hard to believe, but singing helped Estonia, Latvia, and Lithuania gain independence from the Soviet Union. The Singing Revolution began in 1986 with large groups of citizens gathering to sing songs about their heritage. At this time, it was illegal for people to fly the old flags of their countries or show any patriotism to that heritage because they were supposed to embrace being Russian.

People would gather by the hundreds or thousands to hold hands, sing songs of their country, and wave old flags. Patriotic song festivals were held for years across these countries, and the people stood up to tanks and other attempts by the Russian government to silence their songs. In 1991,a new Russian government formally recognized Estonia and other Baltic states as independent.

Unfortunately for some, acts of civil disobedience don’t always result in law changes, peace treaties, or happy endings. You can learn as much from these failed attempts as you can from the successful ones by focusing on the commonalities of what hasn’t worked throughout history.

As a civil protest against slavery in the mid-1800s, renowned writer and philosopher Henry David Thoreau stopped paying his taxes. At first, Thoreau’s quiet stand went relatively unnoticed. But, when he spoke out publicly against the U.S. declaring war against Mexico, Thoreau was arrested for his overdue taxes.

Thoreau used this experience to write the essay “Civil Disobedience” in 1849. In it, he suggested that if people do not cooperate with a law, that law cannot stand. Choosing not to pay taxes to a government participating in unjust laws was Thoreau’s idea of civil disobedience. While his act did open minds and conversations, it didn’t lead to any major tax law changes or revolutions.

The Massacre in Sharpeville

In 1960, a group of unarmed demonstrators gathered in Sharpeville, South Africa to protest a government restriction on travel for non-whites. Police opened fire on the group, killing and wounding nearly 200 peaceful protestors.

Another peaceful protest that resulted in mass death was the Tiananmen Square protest in Beijing, China. The protest started at the city center in April 1989 with demonstrators going on hunger strikes and sitting in the public square. Participants were pushing for reform and talks with Communist Party leaders.

After two months of protests in the square, the government sent in its military to enforce martial law and move protestors out of the area. Without warning, the troops opened fire on the peaceful protestors. Thousands of people were wounded, killed, or even later tried and executed for their participation. Today, China considers all talk of this incident taboo and forbids any discussion or remembrance acts.

A Peaceful Approach to Change