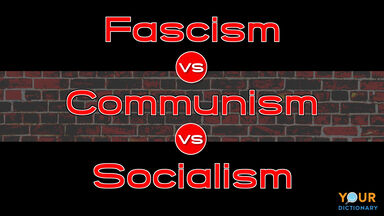 fascism vs. communism vs. socialism
Advertisement

Fascism is a government system led by one person, a dictator, who has complete power over the country. It's also known as a totalitarian government. Citizens of fascist countries must surrender their individual liberties and pledge extreme allegiance to their leader.

Benito Mussolini created the one-party fascist state in post-World War I Italy. His concept of fascismo is based on the Latin word fasces ("bundle of sticks") which was favored in ancient Rome as a symbol of strength, as a bundle of sticks is much harder to break than a single stick. The rise of Mussolini's National Fascist Party is just the first of many historical examples of fascism.

When you call someone a fascist, you're commenting on their oppressive nature. But there's a lot more to the differences between fascism vs. communism or fascism vs. socialism. The principles of fascism include:

Unlike fascism, a communist government focuses on equal treatment and opportunities for all citizens. It opposes capitalism, which encourages private profit and the empowerment of the individual. The philosophy of communism includes spreading its influence across country borders.

The word communism comes from the Latin communis, which means "common" or "universal." The concept of an egalitarian society without classes or economic privilege has roots in ancient Greece, the European Renaissance and the Age of Enlightenment. However, it was Karl Marx and Friedrich Engels who defined modern communism in their 1848 pamphlet The Communist Manifesto. In one of the most famous examples of communism, Vladimir Lenin's Bolshevik party took control of Russia in the 1917 Bolshevik Revolution.

The most basic tenet of communism indicates that workers who are responsible for producing wealth should have a share of that wealth. But there are more important principles in a communist government, including:

Many people believe that socialism and communism are basically the same thing. While communism is a form of socialism, the two government systems are quite different in practice. Socialism can co-exist with capitalism, unlike communism, and does in most modern democracies (known as democratic socialism).

The term socialism comes from the Latin sociare and the French social, meaning "to share." It arose during the Age of Enlightenment as a reaction to Adam Smith's theory of capitalism. The movement gained popularity with Marx's work in sociology and economics, and there are several examples of socialism found in 19th, 20th, and 21st-century politics.

The clearest way to see the differences between communism and socialism are in their philosophies. Some of the main principles of socialism include:

The Influence of Different Government Types

The difference between fascism vs. communism and fascism vs. socialism have come to define 20th and 21st century politics. But fascism, communism and socialism are only three types of government in the world. To contrast these types of government, learn more about how limited government functions, as well as its key principles and global examples. You might also want to understand some related terms like historic vs. historical.