Figure of Speech Examples by Type

A figure of speech is a word or phrase that possesses a separate meaning from its literal definition. It can be a metaphor or simile designed to make a comparison. It can be the repetition of alliteration or the exaggeration of hyperbole to provide a dramatic effect. There are a wealth of these literary tools in the English language. 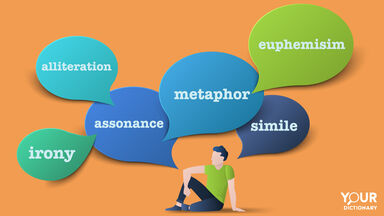 Examples of Figures of Speech

Figures of speech lend themselves particularly well to literature and poetry. They also pack a punch in speeches and movie lines. Indeed, these tools abound in nearly every corner of life. Let's start with one of the more lyrical devices — alliteration.

Alliteration is the repetition of the beginning sounds of neighboring words. Examples include:

Anaphora is a technique where several phrases or verses begin with the same word or words. For example:

Assonance is the repetition of vowel sounds (not just letters) in words that are close together. The sounds don't have to be at the beginning of the word. Some examples include:

Euphemism is a mild or indirect term that often substitutes a harsh, blunt, or offensive term. For example:

Hyperbole uses exaggeration for emphasis or effect. Examples include:

Irony occurs when there's a marked contrast between what is said and what is meant, or between appearance and reality. For example:

A metaphor makes a comparison between two unlike things or ideas. Examples include:

Onomatopoeia is the term for a word that sounds like what it is describing. For examples:

An oxymoron is two contradictory terms used together. Some examples include:

A simile is a comparison between two unlike things using the words "like" or "as." For example:

An understatement occurs when something is said to make something appear less important or less serious. For example:

When someone says "that's just a figure of speech," they may be referring to a common colloquialism or idiom — a non-literal expression that's common in a particular language. For example:

Give Your Writing Some Style

Hopefully, this sampling of figures of speech will offer a nice springboard for you to sprinkle a variety of stylistic and rhetorical devices into your writing. The goal is to be able to express yourself in a more creative, interesting, and eye-catching manner. Use these resources to give your writing that extra oomph: