Foreshadowing is giving a hint that something is going to happen. This is done by showing certain events, people or information that are an indication of something that will occur later on in a story. Foreshadowing can add tension or expectation to the narrative. Review a selection of foreshadowing examples to get a better understanding of this often-used literary device. 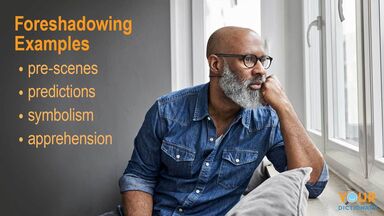 Foreshadowing occurs any time a future event is somehow alluded to or suggested as a future occurrence earlier in a story.

Reviewing examples of foreshadowing helps you see that it is used in many different mediums. The more you become aware of how this literary device is used, the easier it will be for you to recognize it when you see it. Seeing how other authors use it can also help you better use foreshadowing in your own creative writing efforts. For more ways to improve your writing, discover how to write realistic dialogue. From there, explore how active voice can add impact to your writing.