Sentence Fragment Examples and Their Corrections

A sentence fragment is a group of words that resembles a sentence. It will start with a capital letter and have ending punctuation; however, it's neither an independent clause nor a complete idea. Explore types of sentence fragment examples to learn the best ways to correct them. 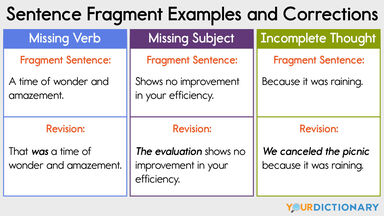 Sentence Fragments Without a Subject

Sentence Fragment Examples Without a Verb

Examples of Intentional Use of Fragments

Sometimes, authors intentionally use sentence fragments to emphasize their writing or convey something harsh or disjointed. Dive into a few intentional fragment sentences made by professional writers to convey a specific message.

Although usually assumed to be a grammatical mistake, as you can see in the examples, fragments of sentences can be used deliberately to lend more meaning to words or impart a specific tone. Having said that, sentence fragments should always be reviewed to make sure they don't need to be revised to carry a complete thought. Now that you have sentence fragments down to a science, you can take a gander at punctuation marks.