America isn’t the only country to ever have a revolution. The French had one too. From defeating the monarchy to Napoleon's rise to fame, explore the major events of the French Revolution timeline by looking at the four different phases. 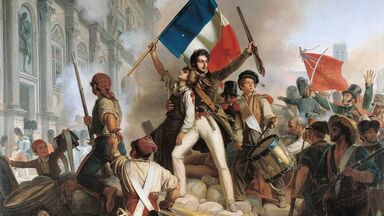 In 1789, the French people were not happy. Due to war and King Louis XVI’s spending habits, the country was utterly broke. On top of that, the peasants had been through droughts and disease, making the harvest inadequate. These poor, hungry peasants had enough. So, they started to revolt. A political party, known as the Third Estate, called for a change in the government. Therefore, several things happened in rapid succession, which led to France becoming a constitutional monarchy.

On June 20th, the Third Estate became the National Assembly and protested on the tennis court of the Estate General building after a failed attempt to take it over.

King Louis XVI tried to take back absolute power by building up ammunition and supplies. However, on July 14th, a Parison mob stormed the Bastille and an ammunition depot, defeating his attempt.

In Paris on October 5th, peasant women marched to protest the famine. The King, Marie Antoinette and their children went into hiding after Marie Antoinette allegedly uttered her famous words, “Let them eat cake,” riling up the mob.

July 1790: Civil Constitution of the Clergy

After several months of questioning what they wanted their government to look like, the Legislative Assembly was created along with a constitution on July 12th. In addition to creating a limited monarchy, it also worked to separate the government from the church.

King Louis knew his reign was over. Therefore, the family tried to get out of France by escaping to Austria. But they were caught. Austria wanted France to support their King and became a bit angry when they didn’t. You know what that means: war.

After the King and Marie tried to escape, things became a bit heated in France. Since the French didn't want to listen to Austria, France declared war. Since the people saw King Louis XVI as a traitor for escaping, he was removed as king, and France became a republic. But that wasn’t enough to appease the people, so the king was executed using the new invention, the guillotine. Then the true Reign of Terror unfolded.

The monarchies around Europe weren’t happy about the way that France overthrew Louis. However, they weren’t going to unite in war either. France didn’t need them to declare war. Instead, on April 20th, they declared war themselves on Austria, starting the French Revolutionary Wars.

While the Legislative Assembly did succeed in getting rid of the king and starting a war, they didn’t succeed in staying in power. On September 20th, a new leader, the National Convention, took the stage after an insurrection in August.

For the National Convention, just being a constitutional monarchy wasn’t enough. They wanted freedom. Therefore, they abolished the monarchy and became a republic on September 21, 1792.

With the Republic’s establishment in France, King Louis XVI was brought to court for his crimes. On January 21st, the king was executed using the guillotine. Nine months later, on October 16th, Marie Antoinette also met the same fate.

While the first phase of the French Revolution had sort of de-escalated with the fall of the Assembly, it ramped up again in 1793. The cornerstone of this was the Declaration of War on Great Britain and the Netherlands on February 1st.

In March of 1793, the National Convention created the Committee of Public Safety. This witchhunt committee headed by Maximilien de Robespierre worked to find and eliminate those who might attack the new nation. From September 5th, 1793, to July 28th, 1794, around 27,000 people died by execution or imprisonment, with about 500,000 arrested.

After the Reign of Terror, France needed to have a constitution for the republic. The Constitution of the Year III was signed into legislation on August 22nd. However, this “new” constitution put the power in a directory of only five wealthy directory members.

The Directory wasn’t doing that great of a job, and people were furious. Therefore, a royalist mob took to the streets to bring down The Directory. On September 21st, Napoleon Bonaparte saved the Directory, starting his rise to power.

Napoleon was pivotal in the French Revolutionary Wars, and The Directory needed him on the battlefield. Therefore, they give him military accolades and merits to defeat the armies of Austria. He also went on to claim Switzerland, Rome and Naples in 1798. His defeat of these oppressors made him a hero in the hearts of the people.

Napoleon Bonaparte wasn’t satisfied with just becoming a military great. He wanted to be a ruler. So, he used his military expertise and national love to become one. Using his military dictatorship, Napoleon defeated The Directory and eventually became an emperor. However, his rise to power was short-lived, and his fall imminent.

November 1799: Fall of The Directory and Rise of the Consul

After returning from the wars, the people hailed Napoleon as the country’s savior and realized The Directory couldn’t do its job. Therefore, on November 7th-8th, a coupe, including Napoleon, overthrew The Directory. The new government needed a ruler, and Napoleon became the First Consul, and eventually, Consul for Life in August 1802.

March 1804: Institution of the Napoleonic Code

After becoming the country’s leader, Napoleon realized that he needed a civil code for the people to follow, which he titled the Napoleonic code. It was officially ratified in France on March 21st.

Why be a simple consul when you could be an emperor? That’s just what Napoleon Bonaparte did. On December 2nd, Napoleon crowned himself emperor of France. This let his domination of Europe continue.

The higher that you rise, the harder you fall. Napoleon learned this lesson the hard way in 1814. After a long and hard battle with Russia, they defeated Napoleon and his army on June 24th after the French lost 300,000 soldiers due to battles, hunger and weather. After this defeat, Napoleon was exiled to Elba but came back for 100 days in 1815. Only to be defeated again.

With Napoleon defeated, the relation of Louis XVI mounted the throne once again. On July 8th, the monarchy was once again restored in France, ending the French Revolution.

Remembering what happened in the French Revolution can be difficult. However, you can print out and post this printable timeline to help you keep all the dates straight.

The French Revolution was a long-fought war by the people to get out from under the oppressive monarchy. While France did become a monarchy once again, several important and life-changing events took place. Now that you’ve explored a bit about the French Revolution, take a look into the U.S. Civil War.