The passing of a loved one can be a sad and somber occasion. And while a gravestone can be engraved with a solemn epitaph poem, sometimes the deceased would rather get in the last laugh. Here follow over 30 funny epitaph examples from celebrities and regular folks alike. 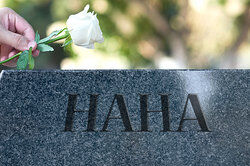 It likely will not surprise their fans to learn that some of the world’s funniest comics and comedians have some rather funny last words on their tombstones. However, using humor on a grave marker is certainly not limited to those who worked professionally in comedy; even notorious train robbers can have a sense of humor.

The Joke’s on You

These epitaphs from real gravestones show that regular people, not just celebrities, can have some fun with their last moments and into eternity too.

Whether you’re thinking about what you’d like to include on your own grave marker or you’re just looking for some macabre laughs, consider a few of these original ideas. There are even a few funny epitaphs that rhyme!

Giggles to the Grave

It’s important to be supportive and respectful when speaking at a funeral. And while the trying time can be filled with tears, it’s also an opportunity to celebrate the life of the deceased.

Take these examples of humor and examples of puns as inspiration to help lift the mood of your fellow mourners.