Sometimes you come across unique political jargon. “Gerrymander” is one of those words that really takes the cake as far as political jargon goes. We'll break down what gerrymandering is by looking at a simple definition. Then, view extreme examples that have happened within the U.S. to further illustrate the concept. 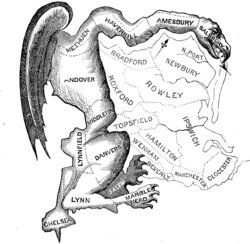 To really simplify the term, you might use a gerrymandering synonym like manipulate. They are manipulating the district lines in their favor. Whether or not gerrymandering is legal is the big question. While most will say it is not, it usually comes down to the Supreme Court.

How Does Gerrymandering Work?

There are two tactics that a government or party might use for gerrymandering.

The first is called cracking. In cracking, the lines are redrawn to spread the opposition’s votes across several districts. This effectively dilutes their vote so it’s not as powerful.

Another tactic is called packing. When you pack your opponent’s supporters, you redraw the district such that the opposition’s supporters condense to a few areas. When you see a district map that has been packed, the boundaries are long and convoluted like a snake. This way, the dominant parties can maintain control of an area.

Why Is Gerrymandering Used?

Gerrymandering is all about maintaining political control over an area. By reducing the impact of your opposition, you can work to guarantee your success in the coming election.

This happened in California in 2000 when their district lines were redrawn. The Republican and Democratic parties worked together to create the district lines to ensure that the current parties holding office were safe.

To get an idea of how gerrymandering can affect an area, look at some of the worst examples of racial and partisan gerrymandering in American history.

Throughout history, there have been several instances where district lines were redrawn to minimize the impact of minority voters by packing them into one area. Explore a few Supreme Court cases to see how this worked.

The court agreed that the irregularity of the lines worked to segregate voters by race. While this was not a case of negative gerrymandering, it was still a case of extreme gerrymandering by a state.

In 1996, Texas used sophisticated software and data to redraw their districts based on race when they were entitled to three additional seats. Since race was used to create the Hispanic and African-American districts, which gave them a bizarre shape, the Supreme Court decided that it was a case of racial gerrymandering.

When the Alabama Legislative Black Caucus faced Alabama, it was due to cracking gerrymandering rather than packing.

In this case, the district lines were redrawn to create districts where the populations were equal. However, since race was used as a factor in the redistricting, and due to the fact that they looked at the state as a whole rather than district by district, the Supreme Court ruled that it was racial gerrymandering.

One of the most famous uses for gerrymandering is to sway the vote to one party or another. This type of gerrymandering isn’t a thing of the past either. There are current cases that are being brought to the Supreme Court.

Examine a few examples to get a better idea of how partisan gerrymandering works.

In a case of partisan gerrymandering, Indiana Democrats brought up that their voices were being suppressed because of the 1981 redistricting plan. This case was noteworthy, because it looked at whether gerrymandering could be considered legal. In this case, it was ruled that it was, in fact, legal.

In this 2004 case, three Pennsylvania residents alleged that the state had devised the districts to lean the election of congressional representatives toward the Republican party. Though it was hotly debated, this case ruled that gerrymandering was unconstitutional, turning over the Davis v. Bandemer ruling.

Gerrymandering is alive and well in the political arena. There were several cases in 2018 that were presented to courts for partisan gerrymandering after the 2018 elections. Currently, the issue of political gerrymandering and its legality is one that doesn’t have a clear answer.

With a name like gerrymandering, you have to wonder where the term came from.

The first instance of gerrymandering happening under the current name was by Elbridge Gerry, a governor of Massachusetts. When he redistricted his state to tilt the votes toward his Republican party, it didn’t go unnoticed.

Given that the district was a weird and abnormal shape, a political cartoon was created in the Boston Gazette of “The Gerrymander: A New Species of Monster.” And with this, the political term went down in history.

The Case of Gerrymandering

Politics is full of all different types of moves and manipulation to win. Gerrymandering is just one of the tools used by governments to give their parties a leg up against the competition. Interested in finding out more uniquely political concepts? Go check out some examples of political jargon.