Gerund Examples, Meaning and Use in Sentences

Gerunds are verbs that end in -ing but function as nouns. Many sentences can include a gerund, meaning that gerunds can function as subjects, direct objects, indirect objects, objects of prepositions, and predicate nouns. Take a look at some gerund examples in sentences, and see how easily you can identify these helpful parts of speech. 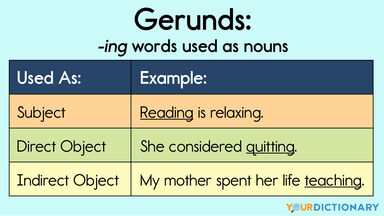 Identifying Gerunds in a Sentence

Gerunds and gerund phrases, which are defined as phrases that begin with a gerund, can function as many different parts of a sentence. Let's take a look at some gerund sentences which will clarify these unique members of the English language. Remember, in every instance below, the gerund is working as a noun.

More examples of gerunds as subjects include:

Gerund phrases can also function as subjects, such as in the sentence "Exercising every day keeps you healthy." All the words before the verb "keeps" are part of the gerund phrase. More examples include:

Additional examples of gerunds as direct objects include:

An example of a gerund phrase as a direct object would be "John enjoys grilling hamburgers." More examples include:

Gerund phrases can also function as indirect objects, such as in the sentence "I made studying for the test my priority." More examples include:

Gerunds as Objects of Prepositions

Gerund phrases as objects of prepositions:

Predicate nouns, also known as predicate nominatives, follow a form of the verb "to be" and rename or explain the subject of the sentence. An example of a gerund act as a predicate noun would be "Lola is sleeping." Additional examples include:

A gerund phrase as a predicate noun would be "Lola is sleeping in the tent." Other examples are:

It may be tempting to assume that every -ing verb is a gerund, but that's not the case. Present participles are another type of verbal also end in -ing but function as adjectives, not nouns. Examples of the differences include:

Can you believe how often we use gerunds in our everyday language? Have some fun with gerunds and keep tabs on just how often they appear in your everyday language. Spotting gerunds can be your new favorite activity! For more grammar practice, take a look at different parts of speech examples and see how they build the sentences you read every day. Or, use a list of adjectives, adverbs and gerunds to make your writing more descriptive.