Global Warming vs. Climate Change: How Are They Different? 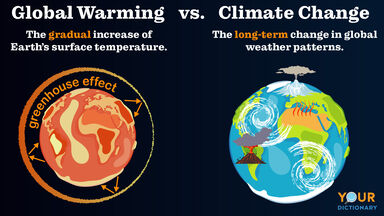 What Is Global Warming?

Global warming is increasing at a rapid rate because of humans. They are adding CO2 to the atmosphere creating a shield that keeps heat in, called the greenhouse effect. As humans burn fossil fuels, like coal and petroleum, the CO2 and other greenhouse gases create a barrier making the sun's rays stay on Earth. With nowhere to go, the sun rays heat up the Earth.

The world getting hotter is going to cause some problems. Explore these examples of global warming's side effects.

What Is Climate Change?

The cause of climate change most commonly talked about in the news is from humans. The burning of fossil fuels and the warming of the Earth causes changes. However, climate change can also be caused by other natural factors like:

Climate change is the way the normal weather patterns of the world change and includes global warming. Keep your knowledge of the weather and climate going by looking at common weather conditions. Then, explore a few climate change quotes that might inspire you to take action.