Gothic literature is a popular genre that dominated Western literature throughout the 19th century and still endures today due to its grotesque yet gripping allure. From the looming image of Frankenstein’s monster to the macabre tales of Edgar Allan Poe, images of the gothic genre have permeated Western literature and popular culture. Explore the morbid, fantastical elements and characteristics of Gothic literature, as well as classic and contemporary examples of this influential genre. 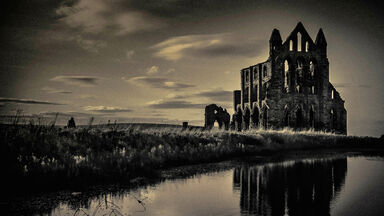 What Is Gothic Literature?

Gothic literature is a genre of literature that rose to prominence in the late 18th century. The term Gothic historically refers to a style of architecture popularized in the Medieval period. The term has since become applicable to any medium that displays particular aesthetic characteristics, such as dark settings and atmosphere and elements of the supernatural. All this and more can be found in Gothic novels.

Many Gothic stories that are read and retold today are now considered classics. Dive into the plots of a few Gothic novel greats.

The Castle of Otranto by Horace Walpole (1764)

The Castle of Otranto contained all the elements necessary to be dubbed the first true Gothic novel. So much so that the subtitle that appeared on the cover was “A Gothic Story.” This genre-defining tale has all the hallmarks of a good Gothic novel: prophecy, a crumbling castle, a madman, a murder, and intrigue.

The Mysteries of Udolpho by Ann Radcliffe (1794)

Ann Radcliffe paved the way for women in the Gothic genre with her groundbreaking and scandalous The Mysteries of Udolpho. This story features noblemen of dubious lineage, a tragic heroine, a brooding villain, seemingly supernatural occurrences, and a creepy countryside castle.

Corruption and downfall take center stage in this Gothic novel with two interweaving plotlines. Readers of the day were riveted and repulsed by the downfall of the titular monk, Ambrosio, and his interactions with a demon, as well as enthralled by the romance between Raymond and Agnes. This Gothic classic features genre staples such as ghosts, demons, rituals, and prophecies.

While Jane Austen is primarily known for her witty romances, Northanger Abbey stands out as an early and markedly different work. Here she parodies the popular Gothic novels of the day through her heroine, Catherine Morland, who is obsessed with the genre, particularly the works of Ann Radcliffe. When Catherine arrives in the titular Northanger Abbey, a dark structure that promises secrets and intrigue, she begins to conjure dark plots at every turn. But are there really dark forces at work, or is it all in her mind?

At just nineteen, Mary Shelley revolutionized both the Gothic and Science Fiction genres with her classic novel Frankenstein. The novel depicts the anti-hero Victor Frankenstein, who is driven to near insanity by his thirst for knowledge, resulting in the creation of the iconic Frankenstein’s monster. The story has been retold countless times and endures as a staple of the genre and Western literature in general.

This celebrated story is an early example of the Gothic genre from an American writer. Poe endures as one of the most influential voices in the Gothic movement and penned countless chilling tales. The master of macabre depicts the downward spiral of his anonymous narrator after he arrives at the home of a friend who has recently passed. Although his friend is dead, the house may be very much alive.

Complete with an eerie castle, an intriguing anti-hero and sweeping, misty moors, Charlotte Bronte takes readers for a chilling journey into the world of Jane Eyre, an orphan girl turned governess in early Victorian England. When Jane goes to work for a mysterious man named Mr. Rochester at Thornfield Hall, strange things begin to happen, including curious noises and mysterious fires. Jane eventually falls for Rochester, who possesses a dark secret that threatens to turn Jane’s world upside down.

Surrounded by mystery, glamor, intrigue, and the perverse, Dracula is a classic character that has transcended time and popular culture. Introduced to the world through Bram Stoker’s writings, Dracula takes you for a wild ride into a fascinating nightmare, mixing terror, suspense and romance into a compelling page-turner for the ages.

Classic Gothic novels gave birth to modern ghost stories and horror. While these works continue to be adapted for modern audiences, new tales are being told all the time. Often these tales replace the castles with urban settings and archetypal figures with contemporary characters, but you still see the essential elements of Gothic literature.

Take a psychological thrill ride with Daphne Du Maurier’s Rebecca. Rebecca weaves a classic tale of a wealthy widower and his new, young wife, whose name is never revealed. However, the ghost of his previous wife, the eponymous Rebecca, hangs over their marriage, and the new wife begins to spiral with a bit of help from a sinister housekeeper.

We Have Always Lived in the Castle by Shirley Jackson (1962)

Shirley Jackson is a name synonymous with modern horror, and her final novel We Have Always Lived in the Castle is no exception. The story depicts the coming of age of its young narrator, a family mystery, an old remote setting, and a sense of unease on every page.

The master of horror himself has also taken inspiration from the Gothic greats. While many of King’s works fit the bill, Carrie has many classic elements: a distressed but complex heroine, a coming of age story, supernatural forces, and of course blood.

In true Gothic style, you’ll get caught up in the haunting secrets and strange happenings taking place in Wylding Hall. Follow this haunting tale as a relaxing escape becomes a terrifying thrill ride for a folk-rock band recounting the disappearance of their lead singer.

The Caretakers by Eliza Maxwell (2020)

Escaping to a crumbling and abandoned estate, Tessa gets pulled into a world of terror, mystery and dark secrets. The Caretakers takes a chilling modern twist on classic Gothic literature themes.

Set in 1950s Mexico, the New York Times Bestseller Mexican Gothic provides a provocative mix of thriller, fantasy and horror elements by following the protagonist, Noemi. Set in a remote country estate, High Place is full of sinister family secrets and hushed whispers that unravel with each new page.

Some subgenres of Gothic literature include Gothic romance and Gothic horror. A popular example of Gothic romance is Jane Eyre, while the term Gothic horror might apply to the works of Edgar Allan Poe. A popular subgenre that has emerged in modern times is Southern Gothic, with notable works such as Their Eyes Were Watching God by Zora Neale Hurston, Beloved by Toni Morrison, and the works of Flannery O'Connor and Cormac McCarthy.

There is a reason the word “gothic” brings to mind trap doors, castles, monasteries, and more. This is because Gothic literature has specific characteristics like:

Gothic literature feeds off the fears and curiosities of the human experience to weave thrilling, imaginative tales. Keep your journey into literature going by exploring different literary genres, including ghost and monster stories.