Republicanism Examples and Features Across History

The term republicanism doesn't refer to conservative values, red states or the GOP. Rather, republicanism describes one's preference in a republic — a state governed by elected officials — instead of a monarchy. The foundations of many modern governments are based on the characteristics of republicanism. 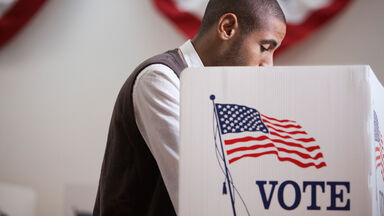 The origin of republicanism comes from the Latin res publica, which means "concern of the public." While the features of republicanism may vary slightly in different nations, its tenets always reflect the rights of the people.

Giving Power to the People

The core belief of republicanism is the concept of popular sovereignty, also known as democracy ("power of the people"), which allows the people to govern themselves by electing representative officials. These officials then carry out the will of the people and the common good. Republicanism mandates that power is never inherited and that the public has the right to practice self-rule.

With this right to self-rule comes the responsibility of civic duties. Another feature of republicanism is the belief that the needs of the community are more important than the needs of the individual, so citizens must participate in the processes of their republic. They can fulfill these duties by voting for elected officials, serving jury duty and paying taxes.

Unalienable rights, also known as natural rights, are the rights that no government can take away from its citizens. Those who believe in republicanism understand that the government must protect these rights on behalf of its citizens. For example, the Declaration of Independence describes these rights as "Life, Liberty and the pursuit of Happiness," and the Bill of Rights directly names Americans' rights to free speech, self-defense, protection of property, and more.

Republicanism rejects monarchies because it maintains that one person should not control the well-being of the entire nation. It's also easier for non-republics to experience corruption because they don't include checks and balances in their governments. In a republic, the executive branch has no more power than the other government branches, and citizens engage in fair and frequent elections to ensure that their voices are represented.

Although the American Revolution was one of the most famous historical displays of republicanism, the concept of republicanism has been around much longer. In fact, many ideals considered to be distinctly American are actually connected to ancient Greece and the Roman Empire.

Republicanism took root in Greek democracy, particularly in the democratic government of ancient Athens around the 6th century B.C. It was an example of direct democracy, meaning that Greek citizens had to be present to participate in state issues, rather than electing their officials. This form of democracy only represented free men in Athens, who represented less than half of the general population. In 338 B.C., Philip II of Macedonia took control of Athens, ending Athenian democracy, although political writings by Aristotle and Cicero would endure.

The Roman Republic was founded in 509 B.C. after the final king of Rome, Lucius Tarquinius Superbus was overthrown. The new republic was guided by wealthy citizens in the Senate until 494 B.C., when an assembly of common people known as plebians formed the Concilium Plebis (the Plebian Council), allowing them to take part in decisions concerning Rome. The Roman Republic lasted until 27 B.C. when Augustus became the first Roman emperor.

Republicanism in the Middle Ages

Although the majority of nations in the Middle Ages were controlled by monarchies, several countries implemented forms of republicanism into their governances. The Polish Lithuanian Commonwealth, for example, was the first republic formed outside Greece and Rome, and it used checks and balances to separate powers governing powers. Four Italian city-states — Amalfi, Genoa, Pisa, and Venice — were known as maritime republics because of the power held by the Italian merchant class.

The Age of Enlightenment brought increased resistance to the institutions of monarchies, which scholars such as Jean-Jacques Rousseau and Montesquieu considered inherently tyrannical. These thinkers referred to classical republicanism developed during the Renaissance, which was inspired by the models from ancient Greece and Rome. In their view, civic virtue and representative government would allow every citizen's voice to be heard.

The United States of America based its Constitution on the definition of classical republicanism developed by philosophers of the Enlightenment. After pulling away from the British Empire in the Revolutionary War in the late 18th century, the United States formed a democratic republic, which combined the representative nature of republicanism with the public power of democracy. This form of government is also known as a representative democracy, rather than the direct democracy of ancient Greece.

The United States may have been one of the earliest modern republics, but it was hardly the last. Many more countries gave up their monarchies in violent overthrows or peaceful transitions, depending on the country. Most of these countries' names include the word "republic" to signify that they are representative governments, but in the cases of banana republics and other countries with an imbalance of power, they may be republics in name only.

Republicanism With a Capital R

Making Government Work For You

At its core, republicanism espouses that every citizen has equal say in the direction of their country. While some countries support this tenet more successfully than others, a truly republican state works to both ensure and protect its citizens' rights. For more helpful information on the different types of government, check out: