You may know that the major Greek gods and goddesses are also represented in Roman mythology with different names. But are these immortal figures really the same in Greek and Roman cultures? Keep reading to learn all about these gods and goddesses and how they differ between ancient cultures. 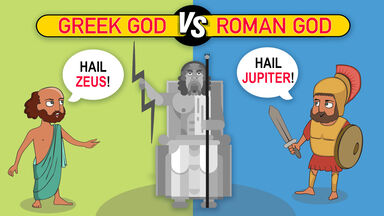 Even though Greek gods predate Roman gods by over 1,000 years, both cultures use mythology to understand the world around them. Greeks and Romans often established societal norms with mythological stories, as gods were not perfect in behavior or personality.

But unlike the Greeks who worshipped the 12 gods of Olympia, Rome worshipped thousands of different gods. They added gods with desirable attributes to their pantheon as they expanded the Roman Empire across the world. When Rome reached Greece, they adopted all 12 gods, changed their names to Roman names, and gave them more traditional Roman personalities.

Check out these additional similarities and differences between Greek and Roman gods.

Both Greek and Roman cultures worshipped powerful goddesses as well as gods. Their origin stories and roles are often very similar to each other, but each goddess in Greek culture is a bit different than her Roman counterpart. Here are some ways to tell the difference between them.

Depictions of Gods in Ancient Poems

Both Greek and Roman gods and goddesses can be traced to ancient poetry. One of the earliest depictions of these gods and goddesses was in Homer’s epic poem The Iliad, written between 1260 and 1180 BC. The poem discusses the immortals’ roles in the Trojan War as they intervene to bring Achilles on his rightful journey.

The Aeneid, a Latin epic poem written by Virgil over 1,000 years later, tells the story of Aeneas, a character in The Iliad and the ancestor of all Romans. Roman gods and goddesses play an important role in this poem as well. They influence other immortals to act in (or against) Aeneas’s best interests in his voyage.

Greek myths helped to explain everyday phenomena in the ancient world. The Roman adaptation of Greek mythology influences our everyday life, from the planets in the universe to the months in our calendar. Learn more about how Greek mythology influenced the modern English language, or check out these legendary creatures from Greek myths. If you want to learn even more about ancient Greece, explore its 4 types of governments.