A heterotroph is an organism whose sustenance comes from another organism. Every food chain begins with an autotroph (an organism that makes its own food for energy) and ends with a series of heterotrophs. Keep reading to learn more where heterotrophs are in different food chains. 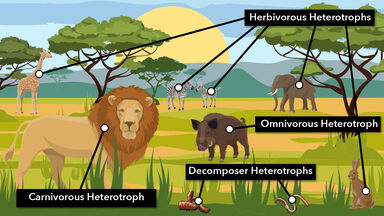 Parts of a Food Chain

Before learning about the different types of heterotrophs, take a look at the steps of a typical food chain. Some food chains are longer than others depending on their ecosystem. Most food chains include these participants:

What do heterotrophs do in a food chain? Find out with examples of the four types of heterotrophs – herbivores, carnivores, omnivores, and decomposers.

Here are some examples of herbivorous heterotrophs and what they eat:

Carnivores, which eat flesh, are usually the secondary or tertiary consumers in a food chain. Some carnivores are the apex predators of their ecosystem with no natural predators. Carnivorous heterotrophs and their food sources include:

You may know that humans are omnivores, which eat both plants and animals. But humans have plenty of company in the omnivore world! Many animals supplement carnivorous diets with plants and seeds, and appear at various places in the food chain.

Here are some examples of omnivores and their sustenance:

You may think that an apex predator is at the top of the food chain. However, the circle of life isn’t complete until the decomposers have something to eat. These heterotrophs break down dead organisms and create new soil for plants to grow in. Decomposer heterotrophs include:

Here are some sample food chains with different heterographs. Every bolded animal is an example of a heterograph.

There are many more food chains in different ecosystems around the world. For more examples of food chains on land and in the water, check out this handy list. You can also learn the difference between food chains and food webs with an article that divides them by biomes.

Understanding where an organism receives its energy is key to understanding biology. You can also learn a lot about an organism by knowing which kingdom it falls into. To learn more about kingdoms and classification, read an article that provides examples of different kingdoms.