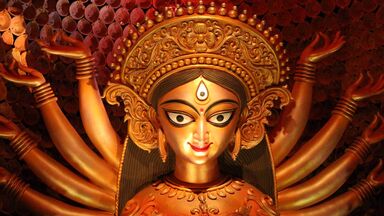 Brahma, also known as Prajapati, is considered one of the core trinity gods along with Vishnu and Shiva. As a god, he was born of the golden egg and created all things, including gods and men. Hence the reason he is called the creator. However, while Brahma is the founder of the universe, he is found more in scriptures than in temples dedicated to him.

Often called the wife of Brahma, Saraswati is the female counterpart of Brahma. Also called Sharada, Saraswati is a goddess of art, wisdom, knowledge, and learning. Much like her name, which means elegant and flowing, Saraswati is considered the creator of Sanskrit and the arts patron.

While Brahma is responsible for the creation, Vishnu, also known as Narayan, is responsible for preserving the world and restoring the balance between good and evil. One of the most famous Hindu gods, Vishnu has nine incarnations (avatars) with a tenth one predicted at the end of the world.

The female counterpart of Vishnu and his wife, Lakshmi, is the goddess of fertility, purity, wealth, glory, and honor. Much like Vishnu, Lakshmi has reincarnations on Earth. She is beautiful in recreations with two of her four arms raised to bless others.

Brahma and Vishnu create and maintain, but Shiva protects and destroys as necessary. Shiva is one of the most complex gods of the holy trinity, given his representation as man’s protector and the darker spirits leader. A guardian god, Shiva resides on Earth and is the destroyer of the universe. Representations of Shiva typically show him in a meditative state.

Much like her husband, Shiva, Parvati is a benevolent goddess linked to harmony, power, love, beauty, renewal, and devotion. Also known as Uma, Parvati can take on alternative forms depending on her emotions.

While the trinity gods are the most well known, they also take on other forms or incarnations. You can also find other important gods dedicated to the elements. Explore a few famous Hindu gods.

Hindi religion has a long history, which includes the philosophical writings of Master Shankara. Keep your knowledge of the Hindu religion going through various Hindu quotes. You might also find information on Madhva, the founder of the Madhvism sect of Hinduism, interesting.