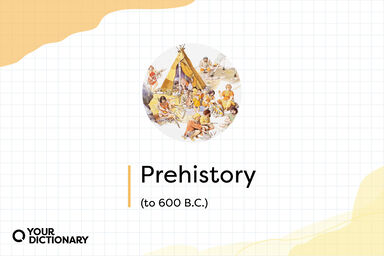 illustration of prehistoric people with dates for Prehistory period
Advertisement

The Prehistoric era in human history reflects the period between the appearance of humans on the planet (roughly 2.5 million years ago) and 600 B.C. (Before Christ) or 1200 B.C., depending on the region. It indicates the period on Earth in which there was human activity, but little to no records of human history. This era is also known as the Foundational era, as many foundations of human civilization occurred during this span of time.

Major Periods of the Prehistoric Era

The Prehistoric era can be divided into three shorter eras based on the advancements that occurred in those time periods. They include:

The Classical era, also known as Classical antiquity, began roughly around 600 B.C. in most of the world. It marked the beginning of a philosophical period in world history as well as the first recorded sources of human history. Politically, the Classical era saw the rise – and fall – of most world empires.

The Classical era was mainly centered around the civilizations on the Mediterranean Sea and their contributions to world culture. These empires included:

The Middle Ages is also known as the Medieval or Post-Classical era. Historians refer to the early part of this period as the Dark Ages due to the loss of recorded history after the fall of the Roman Empire in A.D. 476.

Significant Periods of the Middle Ages

The Middle Ages was an unstable period that lasted for nearly a millennium. Historians often group the era into three distinct periods: the Early Middle Ages, the High Middle Ages and the Late Middle Ages.

The Early Modern Era, which immediately followed the Middle Ages, saw a resurgence of the values and philosophies from the Classical era. When you think of Leonardo da Vinci, William Shakespeare, Johann Sebastian Bach, and Christopher Columbus, you’re thinking of the Early Modern Era.

Movements of the Early Modern Era

The major movements in politics, religion, and geography helped to guide human civilization into the Modern era. These movements include:

The European Renaissance, or “rebirth,” occurred during this period, as well as the discovery and colonization of the Americas and the Age of Enlightenment.

The influences of both the Renaissance and the Enlightenment led to a technological boom in the Modern era, also known as the Late Modern era. The world of politics was rocked by wars, revolution and the end of the monarchy in many countries. The Modern era is truly a cumulation of millions of years of human development.

Major Periods of the Modern Era

Because our history of the last three centuries is so well documented, it’s possible to examine each period of the Modern era on its own. These eras include:

So where does the Modern era end and the next era begin? The only way to know is to learn from these historical eras – and to know more about how society works in large and small ways. Continue your trip through human history and society with a list of key sociology terms and concepts. Then, explore the history of one region with a list of Roman emperors across time.