Hydraulic systems use liquid to transfer energy from one part of a machine to another. You'll find them on the construction site and in factories, but you can find hydraulic systems in your household, as well. Learn how hydraulic systems work and see common examples from our everyday lives. 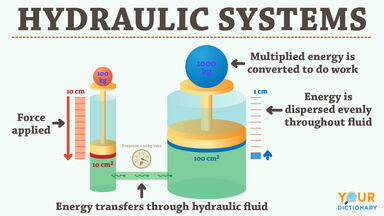 So how do hydraulics work? They use Pascal's Law, which states that a pressure change on an incompressible fluid can be transmitted throughout that fluid. Hydraulic systems allow a user to exert force on one part of the system, which applies the pressure to the liquid and sends the energy to another part of the system, where it is converted to do work.

Many hydraulic systems not only transfer the energy through the system, but they also multiply it. That way, you only need to exert a small amount of force to make a hydraulic system perform a lot of work. A person can exert that force, but so can a motor or another type of machine.

Hydraulic systems are present all over airplanes, including in their landing gear, doors, wing retraction, brakes, and steering systems. Even the earliest airplanes used hydraulic brake systems. These systems are reliable and unlikely to break down, which is even more important when you're 40,000 feet above the ground!

When you step on the brake in your car, the car stops. It wasn't just the minimal effort of your foot on the pedal that stopped your 2000 pound car — it was the hydraulic brake system. It transferred the energy from your foot through the cylinders and pistons of the brake system, and all the way to the brake pads and rotors, via the brake fluid.

If you're sitting at an office chair, lean over and raise it up. Depending on the chair you have, you may have just used a hydraulic system! Dentists, barbers and office workers can easily adjust their chair heights with a small lift on a level or pedal.

Hydraulic jacks help you lift heavy loads, such as cars, large containers and even house foundations. They're most often found in mechanic shops. Hydraulic jacks are more powerful than the emergency mechanical jacks used to change tires.

After its 18th century invention, the hydraulic press has found its way into many modern mechanical systems. It's primarily used in manufacturing as compressive force to flatten or bend a strong piece of metal. Hydraulic presses are often less expensive and take up less space than mechanical presses.

Did you know that there is a hydraulic system inside of you? Your heart (the pump) uses electrical energy to send oxygen via pressurized blood (the fluid) through the tubing (your veins and arteries) to different areas of the body (the actuators). This hydraulic system does the most important work of all — keeping you alive!

Many people get the terms hydraulic system and pneumatic system mixed up. It's easy to understand since they both use fluid power to perform work. They also share many components, such as pumps and valves. However, there is one key difference:

The Power of Engineering

Hydraulic systems allow us to complete large jobs with minimal effort. Without hydraulic systems, industrialized countries might not be so industrialized. They are a prime example of the power of engineering and how it helps us function in our modern world. Learn more about engineering affects your day-to-day life with these examples of mechanical energy that you see every day.