How Many Countries Are in South America? A Complete List 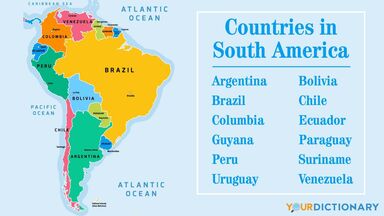 The nearly 1.1 million square kilometers (424,052 square miles) of Bolivia include a variety of geographical features, including the Andes Mountains, the Amazon Basin and the highest navigable lake in the world (Lake Titicaca, which lies between the Bolivian and Peruvian borders). It is the eighth-most populated country in South America after Ecuador, and its citizens mostly speak Spanish and the indigenous languages of Quechua and Aymara.

Nearly half of all South Americans live in Brazil, which is the largest South American country in both area (8.5 million square kilometers, 3.3 million square miles) and population (over 214 million citizens). It is the only country in South America with Portuguese as its official language, though Brazilians also speak Spanish, English and French. Brazil's most prominent landforms are the Brazilian Highlands and the Amazon Rainforest.

Although Chile borders the Pacific Ocean, it's also home to the driest place on Earth (Atacama Desert). Chile is the sixth most populous country in South America with over 19 million citizens and is the seventh-largest by area (756,096 square kilometers, 291,855 square miles). The primary language spoken in Chile is Spanish.

Columbia is the second most populous South American country with over 51 million citizens. Over 99% of those citizens speak Spanish, with many people speaking varieties of Amerindian languages as well. Columbia is located in the northern part of South America, just southwest of Venezuela, and is 1.1 million square kilometers (440,715 square miles).

Ecuador is the fourth-smallest country in South America at 276,841 square kilometers (106,861 square miles). It borders the Pacific Ocean, the Amazon Basin and the Andes Mountains. Spanish is the official language of Ecuador, although Quechua and Amerindian dialects are also commonly spoken in the country. The Galapagos Islands are an Ecuadorian province.

Guyana is located east of Venezuela, north of Brazil and west of Suriname. It's the only South American country where English is the official language because of its history as a British colony; however, most citizens speak a Guyanese Creole language. Guyana has over 700,000 citizens, making it the second least populous country in South America, and is 214,969 square kilometers (82,978 square miles) large.

Paraguay is often referred to as the Corazón de America (the Heart of America) because of its central location on the continent. Paraguay is the ninth largest country in South America in both area (406,752 square kilometers, 157,006 square miles) and population (over seven million citizens). Spanish is Paraguay's official language, although many Paraguayans still speak Guarini, an early language from Paraguay's earliest tribes.

The third-largest country (1.2 million square kilometers, 496,093 square miles) in South America is the home of the Machu Picchu ruins and the source of the Amazon River. Peru is also home to over 33 million South Americans, most of whom speak Spanish, Quechua, Aymara, or different Amazonian languages.

Toward the southern coast of South America is Uruguay, whose area is 181,034 square kilometers (69,879 square miles), only 13,000 square kilometers larger than Suriname. More than one-third of its 3.4 million citizens live in Montevideo, the capital city of Uruguay. The official language of Uruguay is Spanish, though due to its shared border with Brazil, most citizens speak Portuñol or Brazilero — a creole language like Spanglish.

Known as Islas Malvinas in Argentina, the Falkland Islands is a small archipelago off Argentina's Patagonian coast. It is one of 14 British Overseas Territories around the world, meaning that it has its own government but is still maintained by the United Kingdom as of 1833. Argentina tried to claim the islands back with a military invasion in 1982, but they remained in British control. Nearly 3,000 people live on the Falkland Islands, where the official language is English.

French Guiana, which borders Suriname and Brazil in northeastern South America, is one of the overseas collectivities (collectivité d'outre-mer) of France. More than 296,000 people live in French Guiana and speak French or Guianese Creole, although the word Guiana comes from the Amerindian language Arawak. Ninety-eight percent of the territory is covered in forests.

South Georgia and the South Sandwich Islands, a British territory, is closer to the Antarctic Peninsula in the Atlantic Ocean than the Falkland Islands. The islands have a combined population of roughly 30 people, as most of the territory is uninhabitable, and there is no native population. However, it is an increasingly popular destination for cruises and tourists.

The Wide World Around Us

South America is an incredibly diverse continent, both in terms of geography, animal and plant species, and the ethnic makeup of its population. Learn more about the American continents with a list of countries in Central America. You can also head north with a list of all the countries and territories in North America.