How Many People Have Walked on the Moon? Astronauts That Made History

On July 20, 1969, a human stepped onto the moon for the first time. But was he the last person to ever step foot on the lunar surface? Keep reading to learn how many people have walked on the moon, as well as what countries have been to the moon at all. 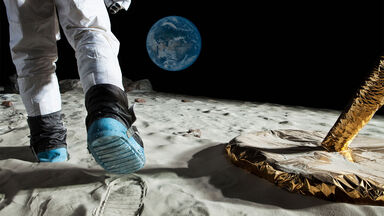 People Who Have Been on the Moon

How many people have ever been to the moon? Over 500 astronauts from 37 countries have been to space, but of that group, only twelve people have been on the moon, and all of them were from the United States Apollo missions (except Apollo 13). Read more about the adventurous men on the manned missions to the lunar surface.

The famous words, "That's one small step for man; one giant leap for mankind" were spoken by the first man to walk on the moon, Neil Armstrong. A Navy veteran of the Korean War, Armstrong performed the first successful docking of two space vehicles while piloting Gemini 8 in 1966. He was the spacecraft commander when he successfully landed Apollo 11 on the moon's surface.

The second man on the moon was Buzz Aldrin, also on the Apollo 11 mission. Aldrin was a fighter pilot in the Air Force during the Korean War and became the first American astronaut with a doctorate degree (Sc.D in astronautics). He was the lunar module pilot on Apollo 11, and with Neil Armstrong, spent over 21.5 hours on the lunar surface.

The commander of the Apollo 12 mission, Pete Conrad, was the third man to walk on the moon. Conrad's first spaceflights were on Gemini 5 and Gemini 11. Upon stepping onto the moon on November 24, 1969, Conrad joked about his short height by saying, "Whoopie! Man, that may have been a small one for Neil, but that's a long one for me."

Alan Bean was the second astronaut on the Apollo 12 mission and the fourth man to walk on the moon. Bean had been on the backup crew for Apollo 9 in March 1969 but didn't make it into space until November on Apollo 12. He and Pete Conrad installed the first nuclear power generation station on the moon.

Although Alan Shepard was the fifth man to walk on the moon, he was actually the first American in space aboard the Freedom 7 in 1961. His lunar landing came 12 years later on February 5, 1971, on Apollo 14. Shepard was the astronaut who famously hit two golf balls on the moon's surface.

The lunar module pilot on Apollo 14, Edgar Mitchell was the sixth man to walk on the moon. A member of the Apollo 13 Mission Operations Team, Mitchell earned the Presidential Medal of Freedom for his work in bringing the Apollo 13 astronauts safely home. He and Alan Shepard spent 33 hours on the moon collecting lunar samples and conducting experiments.

Apollo 15 Commander David Scott become the seventh man to walk on the moon after successfully landing the lunar module on August 7, 1971. He first traveled to space on Gemini 8 with Neil Armstrong in 1966, then became Command Module Pilot of Apollo 9 in March 1969. Scott spent three days on the lunar surface with fellow Apollo 15 astronaut James Irwin and was the first astronaut to drive the Lunar Roving Vehicle (LRV).

John W. Young was Commander of the Apollo 16 mission and became the ninth man to walk on the moon on April 27, 1972. He had previously flown on Gemini 3, Gemini 10 and Apollo 10, and later flew on STS-1 (1981) and STS-9 (1983). Young had also been on the Apollo 13 backup crew along with Charlie Duke and Jack Swigert; Swigert would replace Ken Mattingly on that flight, but never make it to the moon.

The tenth person to walk on the moon, Charles Duke, was also the youngest astronaut to do it at age 36 and 201 days. Duke served on the astronaut support crew for Apollo 10 and Apollo 13 prior to becoming a lunar module pilot on Apollo 16. Duke nearly ruptured his moon suit when he attempted a lunar high jump and fell backwards; luckily, he survived the incident.

The eleventh person to walk on the moon was Eugene Cernan, Commander of Apollo 17 on the final manned lunar mission on December 19, 1972. Cernan was on the backup crew for Gemini 12, Apollo 7 and Apollo 14, and made two previous spaceflights on Gemini 9A and Apollo 10. Cernan was the last astronaut to board the module after the mission, and has the distinction of being the last man on the moon.

Harrison Schmitt was the twelfth and final person to step onto the moon's surface from a lunar module. Schmitt's background as a geologist prepared him for the geological experiments conducted during Apollo 17. He and Cernan docked more time on the lunar surface than any other mission before (74 hours, 59 minutes and 38 seconds).

Who Has Orbited the Moon?

An additional twelve astronauts have orbited the moon but never touched down on its surface. These astronauts include those on the Apollo 13 mission, which had to abort its landing due to an explosion in the spacecraft, and the command module pilots of manned crews that orbited the moon while other astronauts landed on the surface.

Countries That Have Been to the Moon

Other countries that have successfully orbited the moon without landing on it are Japan (Hiten in 1990, Kaguya in 2007), the European Union (Smart-1 in 2003) and India (Chandrayaan-1 in 2008). Luxembourg's Manfred Memorial Moon Mission attached a probe to China's Chang'e 5-T1 in 2014, and Israel's Beresheet spacecraft crash-landed on the moon in 2019.

The Future of the Space Race

For a long time, it seemed like humans would not return to the moon. But recent space explorations around the world have leaders considering a modern space race. Learn more about the origins of the Space Race between the United States and the U.S.S.R with a Cold War timeline. You can also add more space words to your conversations with these cool space and astronomy vocabulary words.