Personification attributes human-like qualities to things that are non-human (such as animals and pets) or inanimate (such as notebooks or stones). It uses subtle word choice to bring the desired tone to a poem — and in the case of humorous poems, the tone is funny! Explore several humorous examples of personification poems. 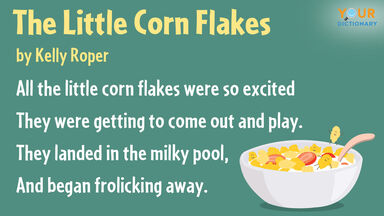 Personification in "Hey Diddle Diddle" by Mother Goose creates silly imagery, such as a dog laughing and a dish running away with a spoon. While this may be a simple nursery rhyme, it's a great example of personification's ability to charm a smile out of us and create a picture in our minds.

"Hey diddle, diddle,
The cat and the fiddle,
The cow jumped over the moon;
The little dog laughed
To see such sport,
And the dish ran away with the spoon."

The Walrus and the Carpenter by Lewis Carroll

Lewis Carroll was another talented writer who used his literary devices well. In "The Walrus and the Carpenter," he personifies the sun and the moon in a way that could make the most hardened heart smile.

"The sun was shining on the sea,
Shining with all his might:
He did his very best to make
The billows smooth and bright —
And this was odd, because it was
The middle of the night.

"The moon was shining sulkily,
Because she thought the sun
Had got no business to be there
After the day was done —
'It's very rude of him,' she said,
'To come and spoil the fun.'"

Shel Silverstein, the modern master of personification, uses clever wordplay in his poem "Shoe Talk." He compares the shoe to a person, both physically and emotionally.

"There’s no one to talk with-
I’ll talk with my shoe.
He does have a tongue
And an inner soul, too.
He’s awfully well polished,
So straightlaced and neat
(But he talks about nothing
But feet--feet--feet)."

The Adventure of Timothy's Bike by Kelly Roper

For children, many of their favorite inanimate objects can take on very human qualities. Take this original poem example by Kelly Roper on the topic of a boy's bicycle.

Timothy's bike was a wonderful beast
Who liked to roll all day long.
Timothy clipped a card near the spokes
So they chattered out loud and strong.
One day Timothy was sick
And couldn't come out to play.
The bike was sad and a little bit mad,
So he decided to run away.
The bike pulled up his kickstand,
and quietly rolled across the lawn.
He hit the sidewalk and started to run,
And in a flash, he was gone.
He rode past the park, his favorite route,
Unaware he was watched by the throng.
The kids were astonished to see a bike
Rolling along with no rider on.
The kids began to chase the bike,
And so he sped quickly away.
He headed straight back to Timothy's house,
And put his kickstand down to stay.
The kids then knocked on Timothy's door,
To tell him how his bike had run away.
Tim looked at the bike still right where he'd left it,
And closed the door saying "No way."

Who said breakfast had to be boring? It is the most important meal of the day, after all. In this original poem, also by Kelly Roper, cereal comes to life, swimming in a milky pool.

All the little corn flakes were so excited
They were getting to come out and play.
They landed in the milky pool,
And began frolicking away.
A spoon dipped in to give some a ride,
And returned many times for more.
The cornflakes' happiness didn't last long,
Because suddenly they were no more.

Adults should also be able to let out a smile or two at the prospect of personification. The same purpose prevails: it makes the verse stand out in their minds and last forever. Even though there are seven common types of poetry, it's not far-fetched to imagine personification popping into each category.

Food plays such an integral part in our lives. We even plan our days around our meals. Given its place of prominence, it's hard not to wax philosophical about food from time to time. Sharon Hendricks brings some of our favorite treats to life in "Dinnertime Chorus."

"The teapot sang as the water boiled
The ice cubes cackled in their glass
the teacups chattered to one another.
While the chairs were passing gas
The gravy gurgled merrily
As the oil danced in a pan."

If Dogs Could Talk by Denise Rodgers

Kids aren't the only ones who can enjoy a humorous poem about pets! In "If Dogs Could Talk," Denise Rodgers dreams about a world where dogs join our everyday conversations. Boy, the secrets they could tell!

"If dogs could talk, what they would say
would simply take your breath away.
Like: I don't want to see your knees.
Or: Pass a bit of roast beef, please.
When dawning sun shines in the east
they'd say: It's time for morning's feast.
When silent, still and somewhat broodish,
their minds are simply on your food dish."

Oscar Wilde's poem about the beginning of spring, "Magdalen Walks," uses vivid imagery to paint a colorful picture of seasonal change. In the fourth stanza, he uses personification to make the forest even more lively.

"And the plane to the pine-tree is whispering some tale of love
Till it rustles with laughter and tosses its mantle of green,
And the gloom of the wych-elm’s hollow is lit with the iris sheen
Of the burnished rainbow throat and the silver breast of a dove."

Those Naughty Keys by Kelly Roper

Kelly Roper's original poem relays the common frustration of misplaced keys, describing the keys as if they had a mind (and personality) of their own.

The keys hung plainly on the hook,
Right where their owner left them.
But they were naughty keys so they
Jumped from the hook and left then.

They loved to find a hiding place
On the floor or between cushions.
But today they sought to find
a spot he'd never look in!

They slipped inside a wastebasket
That sat just under their hook.
Those naughty keys just hid and grinned,
While their owner looked and looked.

The Perfume Bottles by Kelly Roper

In this example of personification in an original poem by Kelly Roper, the bottles of perfume on her dresser are vying for her attention.

Pretty little bottles of perfume
Stood at attention on the dresser.
"Which one of us will she choose today?"
And they each took turns being the guesser.

"She'll choose me," the first one said,
"Because I smell like roses."
"Not likely today," the second bottle said.
"You'll stink up everyone's noses."

"She'll choose me," the third bottle said.
"She loves how I smell like sandalwood."
The second bottle replied again,
"She won't choose you. I know I never would."

The woman came in, looked at her perfumes,
Sniffed bottle two and choosed her.
Bottle two cried, "Yes! She chose me, the best;
I guess you other two are the losers!"

Why Use Personification in Poetry?

Poems with personification use subtle word choices to create imagery and mood. Unlike anthropomorphism, personification does not involve animals or objects speaking and acting like humans. It's used purely for descriptive purposes rather than to make the object or animal a character.

Like many other poetic devices, personification can be a subtle way to set the desired mood. The closer you look at various poems, the more you'll find personification in poetry.

Personification is a member of the literary device family tree, but it's also a citizen of the land of figurative language. Figurative language compares two things in an unusual and interesting way. It lends itself beautifully to poetry because it paints such a vivid mental picture. While you're creating fanciful visions in your mind, enjoy these examples of imagery poems. Younger readers can also enjoy these examples of personification for kids.