A hydrogen bond is the chemical bond in which a hydrogen atom is attracted to an electromagnetic atom. This type of bond is responsible for many of the properties of water. Discover several hydrogen bond examples that are relevant in day-to-day life. 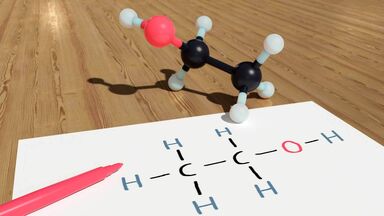 Not a Covalent Bond to a Hydrogen Atom

Hydrogen bonding is a special type of chemical bond that involves dipole-dipole attraction between two or more dipolar molecules, which are also referred to simply as dipoles.

This type of interaction between molecules accounts for many physically and biologically significant phenomena such as the elevated boiling point of water.

Many common molecules that people encounter in daily life result from or are formed by hydrogen bonding.

Hydrogen bonding occurs most famously between water molecules. When one molecule of water attracts another the two can bond together; adding more molecules results in more and more water sticking together. This bond is responsible for the crystal structure of ice, which allows it to float.

Human DNA is an interesting example of a hydrogen bond. In fact, the hydrogen bonding that occurs between base pairs in a strand of DNA results in DNA's familiar double helix shape. This hydrogen bond actually enables the replication of DNA strands.

Hydroflouric acid (hydrogen fluoride) forms a special type of hydrogen bond called a symmetric hydrogen bond. This bond is much stronger than a regular hydrogen bond and can be seen in these acids when they are kept at high pressure. This substance is used to make many everyday products including aluminum, plastics, refrigerants, and high octane gasoline.

Like hydrofluoric acid, symmetric hydrogen bonds form in formic acid. This substance is most frequently used as a way to preserve food for livestock so that it stays fresh as long as possible.

Sorbitol dehydrogenase is an example of a protein that is dependent on hydrogen bonding. It works to convert the sugar alcohol version of glucose into fructose, the same sugar found in many fruits (and in high fructose corn syrup). Hydrogen bonding stabilizes the entire structure, which keeps the protein from falling apart.

Nylon, a synthetic polymer famous for its stretchy qualities, is another hydrogen bond example. The hydrogen bonds in the molecules of this man-made material are responsible for the crystallization of the material in the amide repeat unit. Nylon is used in many fabrics, as well as other everyday items like toothbrushes and hairbrushes.

Cellulose is an organic compound found in trees, cotton and dried hemp, and can be used to make paper, textiles, rayon, and cellophane. Hydrogen bonds are important to maintaining the shape and form of the cellulose compound.

Any polymer that has amide or carbonyl groups within can form hydrogen bonds. As a result, these polymers often have relatively high melting points as well as high tensile strength. Polyurethane is an example of a polymer that contains hydrogen bonding between molecules.

Hydrogen bonds happen in alcohols. As a matter of fact, any molecule that contains a hydrogen atom attached to an atom of nitrogen or oxygen is capable of such a bond. Ethanol is one such alcohol that features hydrogen bonds.

Ammonia is an example of hydrogen bonding. In the case of ammonia, however, the hydrogen bond happens to be relatively weak. This is simply because each nitrogen has one lone pair, which is not enough for all of the hydrogen atoms present. Ammonia is primarily used in fertilizer, though it is also used in cleaning products and other household items, such as commercial or homemade cleaning products.

Molecules containing N- or H-groups allow hydrogen bonding. Methylamine is one such substance. It is used to synthesize other substances, some of which are illegal drugs. It is also used to produce many household products and chemicals including solvents, pharmaceuticals and pesticides. It is also used to tan leather.

As you can see from these hydrogen bonding examples, many of the substances that you encounter in your everyday life involve hydrogen bonds. This makes it apparent just how relevant chemistry is to everyday life. While your mind is on chemistry, it's a good time to further explore this important area of scientific study. Spend some time learning about chemical properties to develop a deeper understanding of the subject. From there, explore some chemical reaction examples. You just might find that you're passionate about chemistry and want to learn more.