Some people live or work in cities while others live in settings that are more remote. The terms rural, urban and suburban are used to describe the different types of settings in which people spend their lives. Discover the difference between rural and urban, as well as the meaning of suburban. 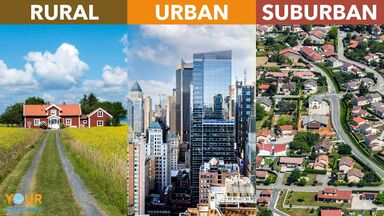 difference between rural and urban and suburban
Advertisement

The term rural is generally used as a synonym indicating that a location is "out in the country." Rural locations are not densely populated. They are outside of cities, further away than suburbs. In rural settings, there are typically large areas of undeveloped land. The town of Mayberry on The Andy Griffith Show is an example of rural America, as are small towns and unincorporated communities from coast to coast.

Rural living tends to be characterized by open spaces and a fairly quiet lifestyle that is free from the hustle, bustle and crowds of city life.

In rural areas, you aren't likely to find multistory office buildings or shopping malls. People who live in rural areas expect to have to go to suburban or urban areas for supplies.

The word urban is used to refer to cities. A lot of people live and work within cities. Cities are densely populated hubs of commerce where a fast-paced lifestyle tends to be the norm. Atlanta and New York City are examples of urban locations.

In urban areas, land is scarce and expensive so people tend to live close together. Multi-tenant properties are common, though they are not the only option. There are single-family homes in most urban areas.

Urban areas are home to a lot of businesses, including corporate offices for large organizations with locations throughout the country or world.

Suburban areas are locations that build up around the outside of cities. They tend to be less densely populated than the cities they surround, though some grow so much that they become cities in their own right. Gainesville, Georgia is a suburb of Atlanta. In New York, Westchester County is a suburb of New York City.

Suburbs are often referred to as bedroom communities, as many residents of the suburbs commute to the city for work.

People who move to the suburbs to escape from the city don't want to have to go back to the city to shop. As a result, suburban areas typically become booming retail centers.

Now that you know what the terms urban, suburban and rural mean, don't stop there. Take the time to further expand your geography-related vocabulary. Start by looking at the difference between a city and a town. From there, explore some examples of geography terms.