Imperialism vs. Colonialism: Differences Made Clear 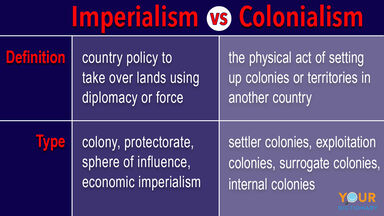 Difference Between Colonialism and Imperialism

Imperialism is the policy that a nation makes to take over the lands of another nation either by force or diplomacy. To take over those lands, they start setting up their own colonies within the country. But colonies are only one type of imperialist policy you might find. The other three types include:

Colonialism is one major type of imperialism where nations set up colonies or dependencies within a foreign country. You typically see this when a large nation takes over smaller, less established nations. Some of the most notable examples of colonialism came from powerful European countries like Spain and English. For example, beginning in 1492 the Spanish established colonies throughout South America and Central America, as well as in the Caribbean. This included the territories now known as California, Nevada, Texas, Mexico, and more.

Just like imperialism, there are different types of colonialism, including:

From ancient times to now, you can find dozens of examples of colonialism. Explore a few colonialism examples for each type.

Imperialism and colonialism might be used synonymously, but these two terms are not the same. Explore other interesting government topics by looking at examples of different types of democracy.