A variable is something that researchers are studying in a research project or experiment. Every scientific experiment involves at least one independent variable and one dependent variable. Discover the difference between these two types of variables and review several examples of each type. 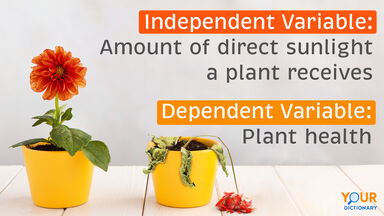 Well-designed research projects require different types of variables. But what's the difference between independent and dependent variables? Their definitions can help you see the differences.

An exercise physiologist wonders if carb loading (eating a lot of carbohydrates) the day before participating in endurance activities (such as triathlons or marathons) impacts performance.

A scientist studies the impact of a drug on cancer. She administers the drug to a research group and a placebo to a control group.

A scientist studies the impact of withholding affection from rats. One group receives a lot of affection, while the other receives none.

A researcher explores whether people who already speak multiple languages learn new languages faster than people who only speak one language.

A researcher wants to know if education level impacts how much a person earns in their job. She studies the amount of education a person has in their life to their current earnings.

National Origin and Net Worth

A social scientist wonders if there is an association between a person's national origin and their wealth, measured as net worth.

An educational researcher explores whether there is a link between the amount of time someone spends studying and the grade they get in a particular class.

A human resources professional wonders if how much money a person earns can impact the extent to which an individual experiences job satisfaction.

A botanist wonders if the amount of direct sunlight a plant receives impacts how quickly it grows.

A medical researcher wonders if the amount of airline travel a person engages in impacts how likely they are to catch influenza during flu season.

Socioeconomic Status and Number of Children

A social scientist explores if there is a link between socioeconomic status and the number of children someone has.

News Viewership and Knowledge of Facts

A media studies researcher wonders if the amount of time a person spends watching television news contributes to how much factual information people know about current events.

Scientific research questions, experiments and statistical data analysis can get very complex. Learning how to recognize the difference between independent and dependent variables will provide you with a strong foundation before you start learning about other types of variables. To further expand your research skills, review some examples of research paper purpose statements.