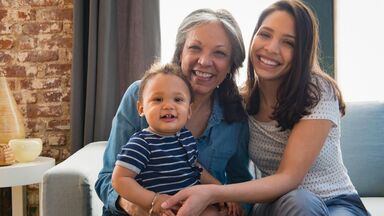 What Are Inherited Traits?

For example, if a mother dog has long hair and a father dog has short hair, their puppy will have the inherited trait of either short hair or long hair. The mixture of genes in the offspring of living things makes every organism on Earth genetically unique.

Animals pass down traits that include camouflaged fur, thick protective scales and attractive feathers for finding a mate. Human genes work the same way. Some traits, such as hair, eye and skin color are polygenic traits — meaning that there are multiple genes that determine their color. Take a look at these common inherited traits that children receive from their parents.

If your mother has blonde hair and your father has black hair, you probably have genes for both colors. But only one trait shows up in your hair color. You may even have a different hair color from your parents, which happens when a trait from a grandparent becomes an inherited trait.

Brown eyes are a dominant allele (one of a pair of genes), so if one of your parents has brown eyes and the other parent has blue eyes, you're more likely to have brown eyes. However, if one of their parents had blue eyes, that recessive trait may be passed to you, giving you blue eyes instead.

Left-handedness tends to run in families, meaning that it appears to be an inherited trait. Scientists have found that both genes and environment have a part in deciding what hand you prefer to write with. However, if you have a left-handed parent or grandparent, you're more likely to be left-handed than someone with only right-handed parents and grandparents.

Has anyone ever told you that you look just like one of your parents? That may be because you inherited their bone and facial structure. A parent with high cheekbones may pass that down to their offspring, as would a parent with a large nose or a prominent chin. Even the bones in the rest of your body are passed down from your parents.

Doctors often try to predict how tall children will be based on their parents' heights. Children typically end up between their parents' average heights, though environmental factors such as nutrition can play a part as well. If you are much taller or much shorter than your parents, look further back in your family tree to see if you can find similar traits in your ancestors.

There are many more inherited traits that you get from your parents. Chances are, if you have one or more of the following traits, your parents and/or grandparents do as well.

You can probably think of hundreds of additional traits that you share with your parents. The list goes on and on!

But what about traits like sports skills or loving spicy foods? While these traits can also run in families, they are known as acquired traits or learned traits. You pick up these qualities as part of being in a family or by simply being alive. Examples of acquired traits include:

Acquired traits may rely on a genetic component — for example, children who are good at sports may have inherited their muscle mass and strong eyesight from their parents. However, many acquired traits come from normal life development.

It's (Sometimes) All in the Genes

Understanding more about your genetic roots can help you learn more about yourself. Once you see what traits you share with your parents, you can look at all the living things in the world with the same perspective. For more information on genetics, read about the difference between genotype and phenotype. Or if you'd like a more basic approach to the topic, take a look at these science terms made simple for kids