Insulator Examples and Their Purpose

Energy works by flowing from one medium to another. But what happens when it reaches a material that it can't flow or transfer to? Take a look at several insulator examples including both electrical and thermal insulators and how they are used in our everyday lives. 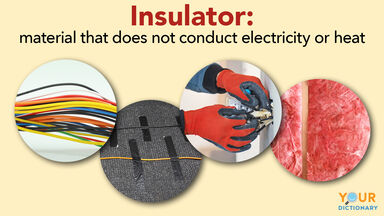 Electricity does not travel well through air; that's why putting a little space between circuits can be enough to insulate them. However, electric fields with very high voltage (over 3 million Volts) can break down the insulation of air and make it conductive. That's why a bolt of lightning — which can be around 300 million Volts — can travel through miles of atmosphere.

Ceramic materials, which are made with brown, red or white clay, are effective insulators of electrically conductive materials. Most high voltage systems contain ceramic wire holders or ceramic coating to insulate wires conducting electric currents. Many industrial companies now use ceramic insulation instead of glass insulation.

When dry, cotton is an excellent insulating material. It's commonly used in cloth tape to insulate electrical wires and keeping people from receiving an electrical shock. However, when cotton is wet, it is no longer an effective insulator and may even become an electrical conductor.

Most diamonds are insulators because of their tight carbon bonds. Blue diamonds are an exception, as there is enough boron present to make them semi-conductors. Diamonds are not thermal insulators, however; they conduct heat quite efficiently. You'll find diamond insulation in many electrical machines such as generators and electromotors.

Fiberglass is a very common insulator material. It consists of glass fibers and plastic woven into a flat sheet. When used as electrical insulation, fiberglass is often tightly braided around high voltage wires and cable conductors. Many wires in high-temperature systems, such as ovens or furnaces, use wires made with fiberglass.

Tiny glass fibers are used in fiberglass, but glass itself can also be used as an insulator. Glass was a popular electrical insulator in telephone and power lines before other materials, such as ceramic and fiberglass, became available. Now, you're more likely to find glass insulators in the antique shops rather than everyday life.

Also known as transforming oil, insulating oil has many practical uses. It's found in oil-filled transformers, high-voltage switches, circuit breakers, capacitors, and fluorescent lamps. Transforming oil does need to be replaced before it degrades, but it a generally stable electrical insulator.

The natural cellulose in paper makes it a strong electrical insulator. Many early electrical machines were made with paper board or pressboard, which is made with many layers of dry paper. Later electrical and telephone cables were often insulated with thick paper, though many companies are replacing these cables with plastic insulation.

Plastic is one of the most popular forms of electrical insulation. It's used in wire insulation (particularly PVC, or polyvinyl chloride) in vehicles, commercial buildings and homes. You'll also find PVC and other types of plastic insulation in electrical bedding and sheathing. Plastic is often used to replace old rubber insulation.

Porcelain is similar to ceramic, but it's made with white clay and is fired at a much higher temperature. For that reason, porcelain is stronger than ceramic and can be used to insulate more electrically conductive materials at higher voltages. You'll find porcelain insulators in power lines and substations.

You may have heard that electricity travels through water, but that's not strictly true. Pure water — water without dissolved salts and metals — is an electrical insulator, not a conductor. However, the materials found in impure water do conduct electricity. Bathwater, pool water and other everyday types of water are not likely to be pure, and therefore may be dangerous when combined with electric currents.

Wood has a lot of empty space, making it difficult for electricity to move through it. But that's only the case with dry wood. When wood gets wet, it expands — leaving less empty space and making it easier to conduct electricity. That's why wood is not often used as a commercial insulator.

Take a look at the list above. Can you identify which materials keep you warm, as well as safe from electrical currents? Several electrical insulators also function as thermal insulators, meaning that they don't allow thermal energy to pass through their covalent bonds, either. These materials include:

We need both conductors and insulators to use electricity efficiently in today's world. But electrical energy isn't the only type of energy that you'll find in our physical world. Check out these everyday examples of different types of energy. For more information on how objects perform work, take a look at several examples of mechanical energy in daily life.