Intertextuality examples can help you better understand how one text can influence another. This can give you a deeper appreciation of some of the great work you read. 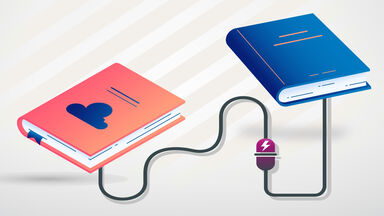 Sometimes, a work of literature refers to another important work in subtle or direct ways. This is called intertextuality. It may be as simple as references to another text or the literary themes in that text, or it may build on what the reader already knows from the original text. Either way, this is an important concept in literature.

Even though it’s a solitary activity, reading can actually be a shared experience. You and your favorite writers have read many of the same books. When an author and the reader have a common understanding of a text, this allows the author to communicate to the reader in terms of that original text. Intertextuality is important because it is another form of communication between the reader and the author.

What Are the Types of Intertextuality?

Intertextuality can take many forms, and you’ll recognize many of them from your favorite books. Here are some types of intertextuality you may have encountered:

The following examples offer insight into the different types of intertextuality, including allusion, pastiche, and parody.

Intertextuality in The Great Gatsby

The Great Gatsby has an intertextual relationship with many other works of literature, but one great example is the Roman satire, Satyricon, by Petronius. In this work, the character Trimalchio is a slave who works tirelessly to improve his position in life. He becomes rich and loves to show off his wealth and power with ostentatious flair. His character is a parallel for Gatsby, and some say that Tremalchio was among F. Scott Fitzgerald’s working titles for the novel. You can see the relationship in this direct allusion from the text:

It was when curiosity about Gatsby was at its highest that the lights in his house failed to go on one Saturday night—and, as obscurely as it had begun, his career as Trimalchio was over.

Toni Morrison’s powerful story of post-Civil War African American life has a strong intertextual relationship to the Bible. One example is the character of Vashti, Stamp Paid’s wife, who was forced into a relationship with her white owner. This character is an allusion to Vashti in the book of Esther.

I looked at the back of her neck. She had a real small neck. I decided to break it. You know, like a twig -- just snap it. I been low but that was as low as I ever got.

J.K. Rowling’s Harry Potter series is another great intertextuality example. It shares much with Through the Looking Glass by Lewis Carroll, including interactions with giant chess pieces. J.K. Rowling also used platform 9¾ as an entrance into a magical world, just as Lewis Carroll used the looking glass.

“Not to worry,” she said. “All you have to do is walk straight at the barrier between platforms nine and ten. Don’t stop and don’t be scared you’ll crash into it, that’s very important. Best do it at a bit of a run if you’re nervous. Go on, go now before Ron.”

Intertextuality in Rosencrantz and Guildenstern Are Dead

Another example of intertextuality is the play Rosencrantz and Guildenstern Are Dead by Tom Stoppard. This is a pastiche of Hamlet, using many of the same characters but exploring the story from a completely different perspective. Here, an interaction between Hamlet and Ophelia is described in very different terms than in the original play by Shakespeare:

Ophelia has been sewing and she holds the garment. They are both mute. Hamlet, with his doublet all unbraced, no hat upon his head, his stockings fouled, ungartered and double-gyved to his ankle, pale as his shirt, his knees knocking each other... and with a look so piteous, he takes her by the wrist and holds her hard, then he goes to the length of his arm and with his other hand over his brow, falls to such perusal of her face as he would draw it... At last, with a little shaking of his arm, and thrice his head waving up and down, he raises a sigh so piteous and profound that it does seem to shatter all his bulk and end his being. That done he lets her go, and with his head over his shoulder turned, he goes backwards without taking his eyes off her... she runs off in the opposite direction.

Jonathan Swift was famous for his parodies, including Gulliver’s Travels. This is an example of intertextuality because it plays off of travel narratives of the time. Swift even mentions this intertextual connection directly in a letter Gulliver writes to his cousin.

I hope you will be ready to own publicly, whenever you shall be called to it, that by your great and frequent urgency you prevailed on me to publish a very loose and uncorrect account of my travels, with directions to hire some young gentleman of either university to put them in order, and correct the style, as my cousin Dampier did, by my advice, in his book called “A Voyage round the world.”

A Greater Appreciation of Literature and Relationships

Intertextuality provides a great subject for a literary essay about a book, since you can find many connections between one text and another. It’s also a fascinating way to view a text from a shared perspective with the author. Either way, understanding intertextuality gives you a greater appreciation of the work you read.