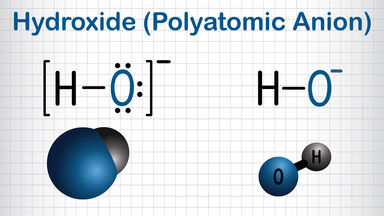 Positive ions are typically metals or act like metals. Many common materials contain these ions. Mercury is found in thermometers, for instance, and aluminum is a metal that is found in a surprising amount of things. It's even an ingredient in baking soda and in certain other food products!

The positive charge (more protons versus electrons) for a cation is shown by a number and plus sign after the formula. If there's just a plus sign, it means the charge is plus 1. Review some examples of cations, or positive ions.

Just as atoms can lose electrons to become cations, some can gain electrons and become negatively charged anions. Again, you may be familiar with some of these ions. Fluoride is sometimes added to community water supplies. Your dentist may also give you a fluoride treatment.

The negative charge (fewer protons than electrons) for an anion is shown by a number and minus sign after the formula. If there's just a minus sign, it means the charge is minus 1. Review several examples of anions.

If an ion consists of two or more atoms, it is called a polyatomic ion. Just like their single-atom counterparts, they too can gain and lose electrons.

Ions with multiple atoms that lose electrons, and are thus positively charged, are called polyatomic cations.

Ions with multiple atoms that gain electrons, and are thus negatively charged, are called polyatomic anions. Per standard notation, the charge is written as superscript text.

When you study chemistry, you will encounter many examples of ions, as well as the different types of ions and how they interact and relate to each other. Now that you know what is an ion and have reviewed quite a few examples, it's time to learn even more on the topic. Be sure to explore some examples of chemical bonds and examples of chemical properties. Perhaps they'll be the catalyst for positive change in your learning experience!