Iron Triangle Examples in US Government

What is the iron triangle? The term "iron triangle" describes the dynamics of policy-making between special interest groups, Congress and bureaucratic governmental agencies. These three groups form the three corners of the iron triangle in the U.S. government. Get a clear idea of what this really means by exploring some iron triangle examples and their impact. 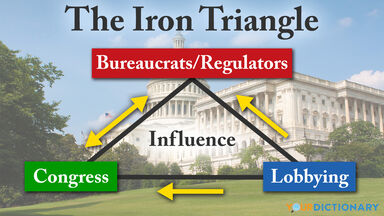 The phrase "iron triangle" is defined as the complex, three-way alliance that exists among the legislative branch of the United States government, its various bureaucratic agencies and special interests. These three key types of entities influence each other in myriad ways, a fact that has a serious impact on the American political system.

Complex Interrelationships Among the Iron Triangle

The interrelationship between the three groups that comprise the iron triangle can create a self-sufficient (and sometimes corrupt) sub-governmental situation in which American citizens' best interests are ignored by Congress or bureaucratic agencies, who instead make decisions as a result of being influenced by special interest groups.

These groups may, directly or indirectly, receive special favors in exchange for supporting certain regulatory changes or passing particular legislation. The impact of the iron triangle is not all bad, though. At times, special interest groups will successfully lobby to have meaningful laws passed that also advance the interests of the American people.

Special interest groups (SIGs) are a key element in the iron triangle because they can create a governmental situation in which lobbyists on their payroll may have an undue influence on governmental representatives. They focus on persuading legislators and government regulators, which make up the other two corners of the iron triangle, to make decisions favorable to their organizations' interests.

The Sierra Club aims to protect the Earth's wild places. Its members consider it their mission to promote the responsible use of the Earth’s resources. Sierra Club's membership is made up of environmentally aware individuals who are very focused on conservation and protecting the Earth. They prioritize the environment above all else, which is often counter to the interests of those who prioritize industry and commerce.

The National Rifle Association (NRA) is a membership-based lobbying organization that advocates for gun rights. They represent the interests of their members as well as gun and ammunition manufacturers. Their primary focus is to prevent the government from passing legislation that would in any way limit gun ownership or the production and sale of guns.

AARP (formerly the American Association for Retired Persons) is a special interest group whose mission is to empower people as they age. Their members are 50 or more years of age, so their primary focus is to ensure that the needs of that population are met.

National Association for the Advancement of Colored People

The National Association for the Advancement of Colored People (NAACP) is a special interest group that seeks to protect and advance the interests of Black Americans, a group of people that have historically faced discrimination and still experience a lack of equal opportunity.

The Iron Triangle: Influences on Congress

The examples above represent just a few of the many special interest groups that exist. Some protect corporate interests while others focus on individual rights. They all have the ability to influence legislators and legislation. Of course, that means Congress. Congress is a key corner of the iron triangle, as they are the lawmakers in the United States.

Congress contains two chambers: the House of Representatives and the Senate. Every state in the U.S. has at least one house representative and two senators. These members work together (or in opposition to one another) to create laws.

Members of Congress sometimes seem to exchange legislation or votes with certain SIGs in order to gain their endorsement and support to finance re-election campaigns. With fundraising being such a key factor in winning Congressional elections, it's not surprising that this happens. It can be difficult for members of Congress to get elected without the endorsement of SIGs that represent the voters they need. As a result, special interest groups may receive special favors when it comes to legislation.

Bureaucratic agencies within the federal government are the third corner of the iron triangle. These entities function as the implementation arm of laws enacted by Congress. The federal bureaucracy consists of many government agencies,

This synergistic effect can lead to decisions being implemented that may be in favor of any combination of Congress, the government agency or certain SIGs, but that may or may not be in the best interests of citizens.

Achieving an Agenda via the Iron Triangle

The iron triangle created by these three groups (special interest groups, Congress and bureaucratic government agencies) is strong because of their reliance on one another to achieve their own agendas. This runs the risk of de-prioritizing citizen needs in favor of political gains. Other times, human interests are fully supported and these groups have served the American public well. Learn about the Civil Rights Movement to discover how grassroots organizing and lobbying efforts can lead to positive change via the iron triangle.