What is an isthmus? The isthmus definition is fairly simple. An isthmus is a long, thin strip of land that connects two land masses. It has water on both sides. Some isthmuses are tombolos. A tombolo is a coastal sedimentary deposit of sand, gravel or silt that connects an island to the mainland. There are many isthmuses in the world, as evidenced by the following list of worldwide isthmus examples. 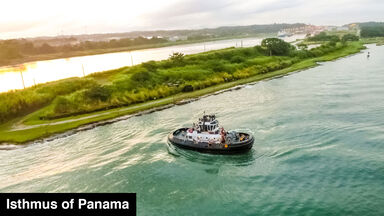 Isthmuses in Central and South America

The region of Central America and the continent of South America are home to many isthmuses. Some connect the two areas together.

There are many isthmuses north of the ones listed above. The countries that comprise North America are home to a number of isthmuses.

The eastern part of the world is also home to a number of Isthmus examples. There are many examples of isthmuses throughout Africa and Asia, as well as Russia.

Many isthmus examples can be found throughout both Eastern Europe and Western Europe.

Isthmuses in Australia and New Zealand

The land down under is also a place where isthmuses can be found. There are isthmuses in both Australia and New Zealand.

Isthmuses are important geographic features, examples of which can be seen throughout the world. Although some are made of land and others of more granular particles, such as sand, they all link two land masses together and have water on both sides. Now that you're familiar with isthmus examples, continue building your knowledge of geography by learning some key examples of geography terms.