Juxtaposition occurs when two things are placed side by side for comparison, often to highlight the contrast between the elements. The simplest example would be the yin-yang symbol. There, you have a circle where the black and white elements stand in contrast to one another - positive and negative - but also complement each other. In the juxtaposition examples below, we'll explore everyday scenarios, literary contrasts, and juxtaposition in art. 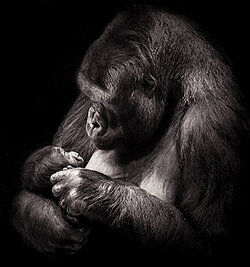 We see contrasts around us every day. And that's the core of juxtaposition. It happens when two or more people, things, or situations are placed side by side in a comparison that emphasizes style, irony, humor or sadness. It can be intentional or unintentional. Let's take a look:

Generally speaking, juxtaposition refers to a stark contrast between two people or things. Sometimes it's deliberate; other times it's a natural occurrence, such as twin sisters where one has light blonde hair and the other has dark black hair.

In literature, juxtaposition is a literary device used to create deliberate differences for the reader to compare and contrast. Let's consider two sisters again. Let's say one is kind and loving, while the other is mean and conniving. An author might present this contrast to further a theme, create suspense, or aid character development. They may serve as character foils.

If a kind heart is paired with a mean spirit, then readers will more readily notice the sisters' personalities and their respective parts in the story. Let's look at some popular examples of juxtaposition from literature:

A Tales of Two Cities by Charles Dickens

Dickens makes wonderfully obvious use of juxtaposition here. He writes in complete opposites, indicating it was both "the best of times [and] the worst of times." How can this be? Well, much of life is a mixture of highs and lows; some have it all, others have nothing. Here Dickens is honing in on that, clueing the reader in on the differences in society before the French Revolution.

Here, Thomas is juxtaposing the struggle for life and the acceptance of death. Death is often referred to as darkness and we see that here with the "dying of the light."

Merry and tragical? Tedious and brief?; That is hot ice, and wondrous strange snow!; How shall we find the concord of this discord?

Shakespeare takes a similar approach as Dickens with his juxtaposition here. He uses blunt language that deliberately highlights specific differences. How can things be merry and tragic? Indeed, Shakespeare wants to take his characters to a place where there is harmony, not discord.

The Waste Land by T.S. Eliot

This is one of T.S. Eliot's most revered poems. Notice how he juxtaposes the month of April with winter. April (springtime) is a sign of warm and cheerful times. Winter can bring on thoughts of cold doldrums. He continues this theme by juxtaposing lilacs in bloom with a "dead land." Surely, flowers evoke thoughts of birth and life, not death.

The Yellow Birds by Kevin Powers

You will soon be asked to do great violence in the cause of good.

Violence is almost never good, but it can be considered right in times of war. In his novel, Powers explores the costs of war and its effects on home life. He uses the war in Iraq to illustrate the different devastations facing soldiers being asked to perform for the good of the country.

Like novelists and poets, filmmakers love to draw out contrasts between characters and themes. Again, it makes things jump out at the audience more. Here are some great moments of contrast in famous films:

When Michael Corleone's son is being baptized, this vision of family love is juxtaposed with violent murders being carried out at Michael's command. This perfectly demonstrates the complex nature of Michael's character.

Mammoth dinosaurs are juxtaposed against the human world. This creates some humor in a tense scene when you see "Objects in the mirror may be closer than they appear" written on the car's side mirror with a view of a towering T-Rex charging toward the car.

Here, a scene with lovers holding each other is juxtaposed against a scene of a soldier holding his dead brother, contrasting the harsh realities of war with everyday life while demonstrating an overarching theme of love and compassion.

This is a brutal depiction of a world post-nuclear war. In one scene, shell-shocked survivors walk past posters of happy, smiling babies, contrasting the current reality with the old.

The school's four pillars of tradition, honor, discipline and excellence are juxtaposed with the students' own pillars of travesty, horror, decadence, and excrement. This is one of many ways the movie contrasts tradition and discipline with individuality and rebellion.

In literature, juxtaposition is used to pull out and magnify certain characters and themes. In art, two elements are placed side by side in order to express meaning without words. Let's explore a few examples:

Expert Photography published a great article on juxtaposition. It explores variations between dark and light. Beyond that, it also uses size and imagery to display contrast. In the second example on the page linked here, we see a father's large hand being clasped by a tiny baby's hand.

Artist Eric Kim also published an article focusing on juxtaposition. He writes, "Juxtaposition is just a fancy word for contrast." The point is, contrast can be achieved in many different ways. It's not just light versus dark or big versus small.

In his fourth example of juxtaposition, Kim explores the contrast between the past and the present. We see a daughter looking at herself in the mirror as she puts on a colorful dress. This stands in contrast to the black and white photo of her parents hanging beside her.

Gurushots has spent some time exploring juxtaposition in photography. The first image in the article is titled, "How dare you!?" It features a large white pelican (apparently) screaming and a poor, little black duck. Both size and color are juxtaposed in this photo.

Reviewing juxtaposition examples shows how elements or concepts can be compared in an effort to magnify their unique qualities. Sometimes, writers use simple techniques like alliteration or rhyming to make things stand out. Juxtaposition is a bit more delicate than that and it can be thoroughly fascinating. Try using it in one of your next pieces of writing.

For more along these lines, check out Writing Advice and Tips on How to Engage the Reader. It discusses important elements like the hook in your intro. Once you've established that, see if you can paint two characters who are total opposites. Have fun with it and happy writing!