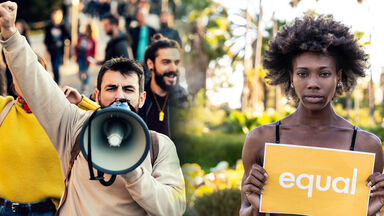 Civil liberties and civil rights sound similar. It’s quite easy to see why they get confused. However, while both terms ensure an individual's rights, they do so in different ways. Probably the greatest difference between the two is government action.

How the government acts is the key difference between civil rights and civil liberties, but there are other subtle differences as well. Get a comprehensive overview of what civil liberties and rights are by looking at each one.

What Are Civil Rights?

As a U.S. citizen, you have certain rights. Not only do you have the right to fair and equal treatment, but you also have the right to government services. These are your civil rights. Civil rights are granted to us via the U.S. Constitution through the 14th amendment, which states all citizens have the right to life, liberty, or property along with equal protection under the laws. These rights were then further expanded on through the Civil Rights Act of 1964, which requires equal application of laws for everyone.

The application of full and equal rights for all seems simple. However, it’s actually anything but. Not only do race and gender come into play, but sexual orientation as well. However, to try to keep it clear, examples of civil rights include the equal treatment of individuals in:

For example, if a public school discriminated against you because of your religion, this would be a civil rights issue. Based on your constitutional rights guaranteed to every U.S. citizen, you should get equal access and treatment to any public or government services. A well-known civil rights case is the United States vs. City of Ferguson following the police shooting of Michael Brown.

What Are Civil Liberties?

As a citizen, you also have certain rights that a government shouldn’t interfere with called your civil liberties. Civil liberties are granted by the Bill of Rights and the Constitution. For example, freedom of speech is a civil liberty. So, if you want to create a poster about problems with your school district and post it in your yard, you can. However, it must meet a few guidelines like not defaming someone.

A famous civil liberties case is the New York Times Co vs. United States in 1971. In this case, Nixon stopped The New York Times from publishing secret documents. The supreme court ruled this was against the First Amendment’s freedom of the press.

Need a quick reference of the difference between civil rights and civil liberties? Check out this handy table to keep everything organized.

When looking at civil rights and civil liberties, it might seem like the differences are clear. However, they can weave together into a tangled mess. For example, the right to marry is a civil liberty that all U.S. citizens are granted. So, the government can’t impede this right. If they try, then you have a civil liberties issue. But what if they only choose to not issue marriage licenses to same-sex couples? Well then, you’ve ventured into the waters of civil rights. See how that can get confusing fast. Either way, your civil rights and liberties are important.

Now that you know a bit about civil rights and liberties, explore examples of prejudice. You might also be interested in examples of bias.