The difference between classical and operant conditioning is the way in which a new behavior is acquired. Understanding these terms can help you with some important concepts in the field of psychology and seeing some examples of both will make their differences clear. 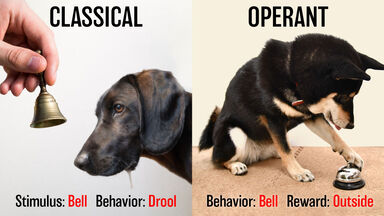 What Is Classical Conditioning?

Classical conditioning is when a conditioned response is paired with a neutral stimulus. The most famous example of this is Pavlov’s dogs, where Ivan Pavlov trained dogs to salivate at the sound of a metronome. The metronome was a neutral stimulus, since the dogs previously had no reaction to it. Pavlov would use the metronome every time the dogs were fed, and the dogs began to associate the sound with food. Salivating was their conditioned response.

You can see real-world examples of classical conditioning in everything from your response to your cell phone to the way you react when you hear holiday music.

What Is Operant Conditioning?

B.F. Skinner proposed the theory of operant conditioning, and he used a simple experiment with a rat to develop the theory. In the experiment, a hungry rat is placed in a box. As the rat explores, it discovers a lever. When it pushes the lever, it gets food. Over time, the rat learns to push the lever to receive food.

In operant conditioning, a desired behavior is paired with a consequence.

Is the Behavior Voluntary?

Quick Reference Guide to Differences Between Classical and Operant Conditioning

The following table shows some additional differences between the two types of conditioning:

Both Are Part of Behaviorism

Both classical and operant conditioning are important in the field of behavioral psychology. Examples of behaviorism include both kinds of conditioning, and it’s fascinating to learn about the way these concepts are applied.