You may know that mammals, fish and birds are members of the animal kingdom. But did you know that the animal kingdom – or the kingdom Animalia – is only one of six different kingdoms in biological classification? Keep reading for an explanation of taxonomic rank and examples of each kingdom. 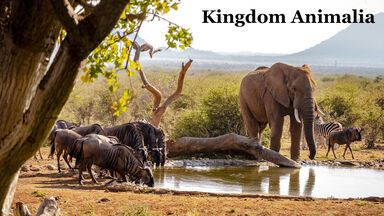 The term kingdom, when used in biological taxonomy, is a separation and categorization of different types of life. There are six kingdoms of life organized into three domains of life in U.S. textbooks.

The four kingdoms that make up the domain Eukaryota include eukaryotic organisms, or organisms that have cells with nuclei. The domain Archaea includes the prokaryotic (or one-celled) organisms, and the entire bacterial world is found in the kingdom Bacteria, which makes up the domain Bacteria. Each kingdom is then divided into subcategories, or phyla. These kingdom examples make up a classification system for all living things on Earth.

Members of the kingdom Animalia are eukaryotic organisms. They reproduce sexually or asexually through parthenogenesis. When you think of an animal, you’re probably thinking of organisms from the phylum Chordata, but there are many more!

Animals in the kingdom Animalia are organized into seven phyla:

The kingdom Plantae includes all plants. Like all members of the kingdom Animalia, these organisms are eukaryotic and may reproduce sexually or by mitosis. If it’s alive, has more than one cell, and uses the sun for energy through photosynthesis, it belongs in the kingdom Plantae.

The four main phyla in the kingdom Plantae are:

Fungi in the kingdom Fungi are also eukaryotic organisms. They reproduce sexually and asexually by producing spores.

There are five phyla in the kingdom Fungi, which include:

The kingdom Protista consists of any eukaryotic organism that isn’t an animal, plant or fungus. They only reproduce asexually or via meiosis. These organisms are also autotrophs, which don’t need to feed on other forms of life for sustenance.

The kingdom Protista has 45 phyla, which can be divided into the following types:

Organisms in the kingdom Archaea (previously called the kingdom Archaebacteria) are prokaryotic, which means that they do not have nuclei. These single-celled microorganisms use asexual reproduction by binary fission.

The five main phyla in the kingdom Archaea are:

The final kingdom is the kingdom Bacteria, sometimes known as the kingdom Eubacteria. It includes all types of bacteria, which are biologically different from archaea. Bacteria are one-celled prokaryotic organisms that reproduce asexually. The kingdom includes a range of 40-100 phyla, with many more proposed phyla.

The kingdom Bacteria is typically grouped into the following superphyla:

Kingdom is the second-highest taxonomic rank in the modern system of biological classification. Phylum comes next in the taxonomy, which follows this order:

Every species on Earth, no matter how small, can be organized according to this hierarchy. But the taxonomic classification can change – and often does – when new species are discovered. Biologists always try to classify an organism as accurately as possible, even if it means adding a new phylum, kingdom or even domain.

Wherever you go on Earth, you’ll find examples of each of these kingdoms. They can be as obvious as a dog, earthworm or human in the kingdom Animalia, or they can be as microscopic as a single-celled organism that causes a bacterial infection. Learn more about biodiversity and how living things depend on each other with these examples of natural ecosystems in biology.

The term kingdom can also refer to a region or group that is governed by a king or queen. The type of monarchy can vary from absolute to constitutional. Learn more about political and royal kingdoms with these examples of different types of monarchies.