The Words That Made 2021 A Lot More Interesting

2021 was a rollercoaster of a year. The world endured the second full year of the COVID-19 pandemic while vaccines rolled out, people continued to work and eat from home (mostly), the world descended further into chaos, and we all tried to figure out what Dogecoin and NFTs are. When we weren’t doomscrolling, that is. Here are the words that defined our year. 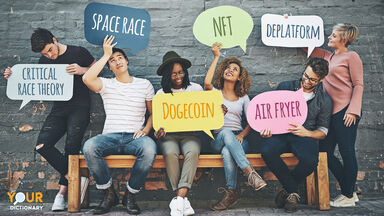 So far the 2020s have seen a lot more people cooking at home and using air fryers, thanks to the pandemic. Although this culinary contraption surged in popularity in 2021, air fryers — which are essentially convection ovens under a different name — have actually been around since 1945. Now, as of 2020, more than 40% of American homes have an air fryer and they topped holiday gift lists for 2021.

While critical race theory (CRT) has been around since the late 1970s, the term peaked in 2021 due to an increase in news coverage. CRT was created as a theoretical framework to analyze and address racism in the U.S. legal system. Scholars of CRT argue that race is a social construct and fixed feature of American society that is used to oppress and exploit minority groups while benefiting white people. In 2021, law professor Khiara Bridges defined CRT as an “analytical toolset for interrogating the relationship between law and racial inequality.”

CRT is also used as an academic framework of analysis in academia. The primary reason critical race theory came up more in 2021 than in previous years comes down to the increase in debates around the topic and a series of bills that were passed in multiple U.S. states restricting the teaching of critical race theory in K-12 schools.

Deplatforming was a hot topic in 2021. The term refers to banning or terminating the account of a user from a digital platform. The typical reasons cited for deplatforming individuals or groups are violating community guidelines or anti-harassment policies.

While deplatforming has been around as long as social media has, 2021 saw a significant increase in the practice following the deplatforming of President Donald Trump. However, deplatforming also predates the internet and historically referred to individuals who were prohibited from speaking at college campuses, usually for political reasons.

With so many people not going into an office in both 2020 and 2021, the term digital nomad has seen a big spike. Digital nomads are people who conduct their work entirely online, so theoretically they can work from anywhere: their homes, coffee shops, libraries, etc. Time will tell if the surge of digital nomads working from anywhere is here to stay, but projections indicate that the number of digital nomads will only continue to increase in the coming years.

What began as a joke to make fun of the unpredictable nature of digital payment systems has now become one of the most popular forms of cryptocurrency. Dogecoin was created in 2013 by software engineers Billy Markus and Jackson Palmer in response to the Doge internet meme of a Shiba Inu dog. The meme became referred to as “doge” because doge (pronounced DOHJ) is a slang term for and misspelling of dog.

Also known as doomsurfing, doomscrolling is the act of continuing to scroll on social media pages and news feeds even though your feed is flooded with news of floods and fires, a two-year-old pandemic that shows no signs of ending any time soon, and Pete Davidson’s dating life. So basically it’s what you do any time you log on to Facebook or Twitter.

The term doomscrolling is believed to have been coined on Twitter in 2018 by finance reporter Karen Ho. However, the phenomena predates the word and its origins are uncertain. The term surged in popularity in 2020 and 2021 during the COVID-19 pandemic, and the bad habit of endless browsing through bad news became so widespread that the term doomscrolling is now recognized and used by almost everyone.

While the term "ghost kitchen" became prevalent in 2020, 2021 proved both the word and concept are here to stay. A ghost kitchen is a kitchen where food is cooked that is meant to be eaten somewhere other than the premises. Ghost kitchens can be a traditional brick and mortar restaurant or standalone facility designed specifically for takeout or delivery. The term “ghost kitchen” was first used in a 2015 NBC New York article where an investigation found that restaurants were listing under different brands on delivery service apps like Grubhub and Seamless. However, the term has evolved since then to any restaurants that specifically fulfill online orders.

With COVID-19 restrictions on restaurants, the ghost kitchen market accelerated “five years in three months” of 2020. Traditional dine-in restaurants converted their kitchens into ghost kitchens and expanded their delivery and takeout services.

The company formerly known as Facebook was featured prominently in the news in 2021, but the announcement that they were developing the Metaverse and rebranding as Meta inspired the most headlines (not to mention memes). The Metaverse is a conceptual version of the internet that will use virtual-reality headsets to create a 3-D augmented reality. While the term became part of the zeitgeist in 2021, it was actually coined in a 1992 science fiction novel Snow Crash by Neal Stephenson. The concept for the Metaverse and virtual reality, in general, has existed for decades in the realm of science fiction and Silicon Valley speculation, but it is now making the transition from science fiction to science reality.

Let’s be honest: Most of us don’t understand what NFTs are, even if you’ve looked it up or asked that one Twitter friend who acts like they know all about it. NFT stands for non-fungible token and it is a unit of data stored on a digital ledger or blockchain. NFTs have unique identification codes and metadata that distinguish them from one another and are non-interchangeable. For comparison, Bitcoin is fungible, but NFTs are one of a kind and can’t be replaced with something else.

NFT became one of the most popular search terms of 2021 after Twitter founder Jack Dorsey sold an autographed version of his first-ever tweet as an NFT for $2.9 million. Additionally, NFTs generated $2.5 billion in sales in the first half of 2021 alone. The increase in popularity is also attributed to rising interest in alternative forms of digital currency, and NFTs have the benefit of being used and shared on multiple platforms.

While hardly new, the term “space race” saw a renaissance when it was announced that Amazon CEO Jeff Bezos would be going into space with his company Blue Origin on the anniversary of the Apollo 11 moon landing, July 20, 2021. Unlike the Space Race of the 1960s between nations like the United States and the USSR, the new space race is between private companies and individuals. The term “space race” was frequently tossed around in the media as tensions escalated between Bezos and fellow billionaires Elon Musk and Richard Branson, both of whom also have their own private space exploration companies.

With the rollout of the COVID-19 vaccine, it’s no surprise that vaccine-related words were some of the most searched in 2021. Vax is an abbreviation for vaccine that has been in use since the 1980s but gained momentum in 2021. Vax can also be spelled vaxx, but the spelling with one x is more popular. The double “x” spelling is more common in verb or adjective form. For example, “I just got vaxxed” or “double-vaxxed.”

Now that you’re up to date on the latest lingo, here are some other language-related trends we think you’ll find interesting.