Largest Cities in the US by State

According to the U.S. Census Bureau, more than half of the ten biggest cities in 2019 in the United States (U.S.) are in California and Texas. Explore the largest cities by state in all 50 states to see which city in your home state houses the most people. 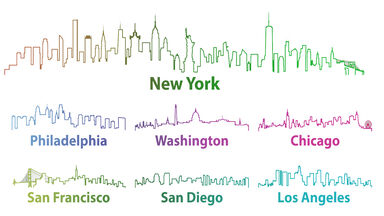 Large cities in the US
Advertisement

You probably won’t be surprised to learn that these are the biggest cities by population in the U.S.

The U.S. is often split into 5 regions. The Northeastern portion of the U.S. includes nine states.

The Southeastern region of the U.S. is the largest region in the country.

Most Populous Cities in the Midwestern United States

The Midwestern region of the country includes 12 states.

The Southwestern region of the country includes only four states, but they are some of the biggest states in terms of land area.

The Western portion of the U.S. nine contiguous states along with Alaska and Hawaii.

A Big City for Every State

A quick look at the most populated cities in each U.S. state gives you an idea how big each state is. Now that you know the biggest city in each U.S. state, it’s time to go global and learn the largest cities around the world.