Learn what latitude vs. longitude is to get a clear understanding of what these two terms mean and what they measure. Figure out what latitude and longitude mean in a clear way through examples. 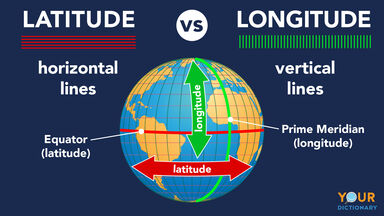 If you’ve ever looked at a GPS, you might notice latitude and longitude. But what does that mean?

Differences & Similarities Between Longitude vs. Latitude

Now that you know the definition of latitude and longitude, explore a few differences and similarities between these two.

To see why this is, you could put parallel lines horizontally on a ball. You’ll notice that as you get closer to the top, the lines you create get smaller and smaller because the ball is thickest at the middle and gets thinner as you.

Latitude is measured using degrees, minutes and seconds (DMS), one degree is 60 minutes and 1 minute is 60 seconds. Lines of latitude are measured in degrees from 0 to 90 degrees. As you might guess, the range is 0 at the equator and 90 at the North Pole and the South Pole. Latitude can either be negative (S) or positive (N). It can also be calculated in all positive numbers and denote N or S. Some examples of latitude include:

The Meaning of Longitude

Since everything has to start somewhere, lines of longitude start at the prime meridian. The prime meridian runs through Greenwich, England, and goes until it reaches the antimeridian, or International Date Line, which is halfway around the Earth.

How to Measure Longitude

Lines of longitude are measured in degrees from 0 to 180 degrees running east and west. Like latitude, longitude is measured using degrees, minutes and seconds (DMS). The prime meridian is 0 degrees, and the antimeridian or International Date Line is at 180 degrees. When you cross the Internation Date Line, the day magically changes with the west being one day ahead of the east. Longitudes are also positive (E) and negative (W) or denoted as E and W.

How to Keep Latitude and Longitude Straight

Knowing what latitude and longitude are is only half the battle. Remembering which one is which of these L words can be more difficult. When thinking of latitude think ladder. Latitude runs horizontally across the earth like the rungs of a ladder. To remember longitude, think about long. Something that is long runs vertically up and down. You can even use this fun phrase.

Latitude vs. Longitude: Places on Earth