Law of Conservation of Energy Examples

The law of conservation of energy is a law of physics that states that energy cannot be created or destroyed, but only changed from one form into another or transferred from one object to another. This law is taught to middle school and high school students in physical science, physics and chemistry classes. 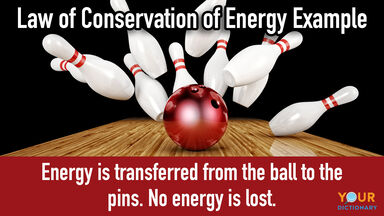 Understanding the Law of Conservation of Energy

The law of conservation of energy definition emphasizes that energy is not something that can be destroyed or created. It's important to understand what that really means. It would be incorrect to say that the purpose of an experiment would be to make energy, as that would involve an effort to create something that cannot be created. Instead, energy is constantly being transformed so that it can be used. For example, solar panels don't create solar energy. They harness energy from the sun and transform it into another type of energy (electricity).

Energy can be transferred between people, or from people to objects. These examples all illustrate the law of conservation of energy.

When two objects collide with each other, energy will transfer between the two objects.

Other Conservation of Energy Examples

Many other situations illustrate how energy can be changed from one form to another or transferred between objects.

The law of conservation of energy examples above show how commonplace this physics concept is in everyday life. Now that you're familiar with this scientific law, take the time to learn about different types of energy.