Have you ever sat in your office or class and wished a fairy, a knight, or even a three-headed hellhound would save you from the boredom? If so, you may want to pick up a collection of ancient mythological tales. 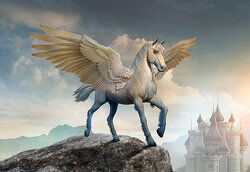 You'll find stories of dashing heroes that try to live up to the hero in Homer's Odyssey, Ulysseus, plus fearful monsters that can take your life with one fell swoop. You'll ride on the backs of winged horses and dance beneath the moonlight with spellbinding sirens. Mythological lands are boundless but, as an introduction, let's take a look at some of the most legendary creatures from mythology.

This form of mythology relates to mainly the Irish and Scottish. Those two have a closely linked history and share a common language, Gaelic, although each dialect is quite distinct. The Celts were also found in Wales and south-west England. Let's take a look at three famous creatures from Celtic mythology.

In both Irish and Scottish myth is a creature that foretells death.

The Irish bean-sidhe, or Banshee is, perhaps, the most well-known Celtic mythological creature. When her wail is heard upon the night air, it's a signal that someone is about to die. This spirit - sometimes described as a haggard old crone and sometimes as a beautiful young woman - often rides side-by-side with a dark spirit from the fairy realm named the Dullahan.

In Scots Gaelic, Bean-Nighe translates to Washer Woman. She's a fairy that can be found near rivers or streams. When you come upon her, if she's washing someone's clothes, that person is about to die.

The Kelpie, or water horse, is a malevolent water spirit in Scottish mythology. It appears near waterways as a tame horse, but if a human is foolish enough to get on its back they will stick to it and the spirit will carry them down into the water to be eaten. In this form, it is said, children are the main target. The solitary kelpie is also said to be able to appear as a beautiful woman or man to lure adults to it, possibly for food, but possibly because it's feeling lonely.

The Celts of Wales and Cornwall had their own fearsome creature, the wyvern. The myths of wyverns, a kind of cross between serpents and dragons, were strong across that region.

Wyverns are smaller than dragons and, while dragons have four legs, wyverns only have two. Wveryns' front legs are attached to their wings, which can make things quite cumbersome in a fight. Still, they're swift and just as fierce as dragons. They don't breathe fire but are said to have a stinger or barb in their tails and pollute the ground they walk on. Today, you'll find wyverns adorning flags, emblems, and school uniforms across the UK and beyond.

If you make a study of Egyptian and Greek mythology, you'll come across certain similarities. Both speak of sphinxes, for example. Still, there's no denying the ancient Egyptian culture is as rich and alive today as King Tut's tomb. Let's take a look.

This fantastical mythical creature has origins that are shrouded in mist. No one can really pinpoint when this beast stepped into mythology, but both the Egyptians and the Iranians speak of it. If you ever come face-to-face with a griffin, you'll be staring down a creature with the body, rear legs and tail of a lion, and the head, wings and talons of an eagle. Like his fellow soldier, the Great Sphinx of Giza, the griffin's primary purpose was to guard massive mounds of treasures.

The Greeks and Turks also have their own tales of sphinxes, still, the Egyptian Great Sphinx of Giza is the most well-known. Sphinxes have the body of a fearsome lion and the head of an Egyptian human. Their primary function is to guard massive mounds of treasures; no human shall be allowed to enter unless they can answer a difficult riddle. Egyptian sphinxes are said to be even-tempered and non-aggressive. Other variations, especially in Greek and Turkish versions, sometimes present sphinxes that are less docile.

Wadjet is an Egyptian goddess and a winged snake. She's one of Egypt's first deities and is often depicted as a cobra. Her primary purpose was to guard Lower Egypt. Beyond that, she was also tasked with the protection of kings and women in childbirth.

Pharaohs often wore a crown with her symbol on it. Wadjet is also known for having nursed the infant god Horus and, together with Horus' mother - Isis - protected Horus from his evil uncle.

The Greeks dominated ancient mythology. This was certainly one of their many strong points. In fact, the word "myth" comes from the Greek word "mythos," which means "story." Much of the world today has some sort of footing in Greek culture. Let's take a look at a few of the most vibrant creatures in Greek mythology.

In Greek mythology, Campe - or Kampe - is a frightful she-dragon. From the waist up, she is a gorgeous woman. Her lower body, however, is that of a dragon. She also has a massive scorpion tail raging with venom. Snakes always gather around her ankles. Her long fingernails are curved and they alone can do significant damage with just one swipe.

Centaurs are quite popular. You might've seen an image of a half-human, half-horse somewhere in your fairy tales. Their head, arms, and torso are that of a man. The rest is a muscular horse.

They're said to be descendants of Ixion, the king of the Lapiths, and Nephele, a nymph molded out of the clouds to resemble Hera, the wife of Zeus. Interestingly, Chiron is one of the most notable Centaurs and he was known for being civilized and modest. This makes him a standout because, by nature, centaurs can be lustful and wild.

Cerberus is a three-headed hellhound that guards the gates of Hades. His job is to guard the gates of the Underworld so that none of the dead can leave. Now, anyone who's crossed the River Styx into the Underworld would find it nearly impossible to escape. Cerberus will be difficult to get past because not only does he have three heads, but he also has a serpent for a tail and snakes protruding from his body.

A cyclops is a member of the race of giants. They paid no mind to the laws of the gods. These creatures only have a single eye in the center of their forehead. In one excerpt from Homer's Odyssey, the hero Odysseus comes face-to-face with a cyclops named Polyphemus, the son of the god Poseidon.

Harpies are famous for being half-bird, half-woman. Again, Homer depicts these famous creatures in his writings. He uses them to personify storm winds, given their mighty wings and clawing natures. Some depictions show harpies as elegant and beautiful women, with rapturous wings. Others paint the harpy as an ugly woman, full of hunger and hateful harm.

Continuing with the bird theme, sirens (sometimes spelled seirenes) are often depicted in some form of a woman and a bird. Early Grecian depictions show them as birds with women's heads. Later drawings show them as beautiful women with the legs of birds. Sometimes they had wings, other times they did not.

Still, sirens took pleasure in one thing: they'd lure sailors with their harmonic voices until the sailors wrecked their ships on their island. After that, death was imminent. Homer, again, told the tale of the sirens when the great hero Odysseus encountered them during his journey home from Troy.

Pegasus is one of the most legendary mythical creatures of all time. He's even more impressive than a unicorn, if you can imagine. He's a winged stallion with a mane of pure white snow, said to be the offspring of the Greek god Poseidon, with a mixture of Medusa's blood. Whenever Poseidon's hoof hits the earth, a spring of water appears.

Kaiju is a genre within Japanese film. In these films, you're sure to find a giant, mythological creature attacking major cities while militant forces are deployed. Sound a little bit like Godzilla? Perfect, because we need to begin this category by discussing his number one rival.

King Ghidorah is a three-headed monster and Godzilla's archenemy. But, wait, it gets better. In addition to his three heads, King Ghidorah also has two tails, golden scales, and giant bat wings. Ghidorah was originally seen as an extraterrestrial dragon sent to destroy planet Earth. Other variations simply show him as a guardian of ancient Japan.

Legends surrounding Yamata no Orochi can be found in ancient Japanese texts, dating all the way back to the revered Kojiki, a collection of myths and legends, requested by Empress Genmei who reigned from 707 to 715 AD.

Yamata no Orochi is an eight-headed, eight-tailed dragon. More than that, its body is said to be long enough to span eight mountains while its body is disguised by moss and trees. Every year, this monster would make an elderly couple sacrifice one of their eight daughters.

The couple and their last daughter, Kushinada-hime, met the great hero, Susano-o, when it was time for her to be sacrificed. With a promise to take her hand in marriage, Susano-o turned Kushinada-hime into a hair clip in order to hide her. Once hidden, he saved her by getting the monster drunk on eight vats of saké, or rice wine, and then cutting it into pieces.

World mythologies expand well beyond what we could include here. The legends live on in books, movies, and our minds. For more, check out these other types of mythology. But, why do we so often read about dragons and other mythological creatures? Did they ever exist? Do they exist in some other world?

Let your mind wander as you fancifully drift into lands where the Banshee flies alongside headless horsemen, Cerberus guards the dead, and King Ghidorah battles it out with Godzilla. And, if you ever want to incorporate any of these fanciful delights into one of your short stories, be sure to enjoy Get Creative: How to Write a Short Story. Let the myths and legends live on forever!