A limerick is a humorous poem consisting of five lines. The first, second, and fifth lines must have seven to ten syllables while rhyming and having the same verbal rhythm. The third and fourth lines should only have five to seven syllables; they too must rhyme with each other and have the same rhythm. 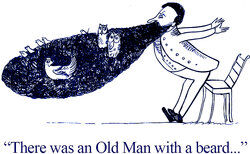 Edward Lear, a famous British poet, and writer of literary nonsense, is widely considered the father of the limerick. He didn't write the first limerick — the first limericks came about in the early 1700s and are often preserved in folk songs — but he popularized the form. More importantly, he wrote some of the best. His limericks often consisted of stories about an old man:

There was an Old Man with a beard
Who said, "It is just as I feared!
Two Owls and a Hen,
Four Larks and a Wren,
Have all built their nests in my beard!"

There was a Young Lady of Dorking,
Who bought a large bonnet for walking;
But its colour and size,
So bedazzled her eyes,
That she very soon went back to Dorking.

There was a Young Person of Crete,
Whose toilette was far from complete;
She dressed in a sack,
Spickle-speckled with black,
That ombliferous person of Crete.

The limerick is a classic verse form in English. The earliest known example comes from the 11th century! In that time, there has been more than enough opportunity to pen a few classics. Here follows some examples of limericks from famous authors:

A famed poet and humorist, Dixon Lanier Merritt's limerick "A Wonderful Bird is the Pelican" is often misattributed to poet Ogden Nash:

A wonderful bird is the pelican,

His bill holds more than his belican.

He can take in his beak,

Enough food for a week,

But I'm damned if I see how the helican.

A man hired by John Smith and Co.

Loudly declared that he'd tho.

Men that he saw

Dumping dirt near his door

The drivers, therefore, didn't do.

The author of the classic Alice in Wonderland, Lewis Carroll, also made great use of limerick poetry, as seen in "There was a Young Lady of Station:"

There was a young lady of station

"I love man" was her sole exclamation

But when men cried, "You flatter"

She replied, "Oh! no matter!

Isle of Man is the true explanation.

Did you know that James Joyce or Salman Rushdie had written limericks? It's surprising just how many famed writers have turned to this nonsense poetry form, as you can see from this further list of classic limericks from famous authors.

The wonderful thing about limericks is that anyone can write them. The simple rhythm and form are ideal for anyone inclined to write something silly. For instance, Ron Rubin, expert versifier and jazz musician, wrote this one:

There was an old drunkard of Devon,
Who died and ascended to Heaven;
But he cried: 'This is Hades-
There are no naughty ladies,
And the pubs are all shut by eleven.

Here's a classic by the most prolific poet of all, Anonymous:

There was a young lady of Lynn,
Who was so uncommonly thin
That when she essayed
To drink lemonade
She slipped through the straw and fell in.

Finally, editor Monica Sharman wrote a limerick that resonates with writers the world over:

Relentless, insatiable deadlines!
This manuscript's still full of red lines.
First I'll sweat through the edits
and check all the credits
then chill with my favorite red wine

New and original limericks are still being written today. We can prove it! Here follows a triptych of limericks, written just now for your enjoyment. So… enjoy!

There was a young lady of Nice,
Who insisted on bathing in grease.
She slid through the house
Tormenting her spouse
Til he hid in the oven for peace.

Here our story continues to unfold:

That very same lady, I'm told
Had a pet most uncommonly bold
Not a cat, rat or woodchuck
But a self-driving tow truck
That dragged her young man down the road

And the last will bring us full circle:

But her husband cried aloud, "Cease!"
And with a toasting fork gained his release.
He popped every tire
Then said "I perspire,"
And joined his dear wife in the grease. - Matt Salter

The Joy of Nonsense

Literary nonsense is a rich and enjoyable genre. Limericks are just the beginning. Our examples demonstrate the accessibility and diversity of the limerick form. For some further examples of funny limericks, why not write your own?

For inspiration, visit our page of quotes from Edward Lear or, if you like a spooky touch to your nonsense, explore the life of the whimsical and eminently Gothic writer and cartoonist Edward Gorey.