Central America is a distinct portion of the continent of North America. It consists of seven countries. Discover where it is located and review a complete list of Central American countries. 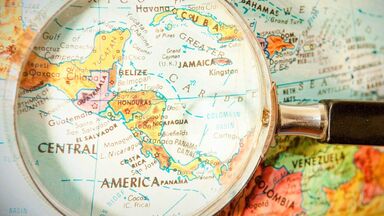 Where Is Central America?

The seven countries in Central America are listed below, along with some key facts about each nation. They are arranged in order by population, from largest to smallest. Population statistics are current as of 2020.

With 17,915,568 inhabitants, Guatemala is the most populous country in Central America. It stretches all the way across Central America, touching both the Caribbean Sea and the Pacific Ocean. It shares borders with four countries: Belize, El Salvador, Honduras, and Mexico. The country's capital is Guatemala City. Spanish is the country's official language.

Nicaragua has a population of 6,624,554. It is the biggest country in Central America in terms of size (not population). It shares borders with Honduras and Costa Rica. It also touches both the Caribbean Sea and the Pacific Ocean. The capital of Nicaragua is Managua. Spanish is the country's official language.

San Salvador is the capital of El Salvador. The country's population is 6,486,205 people. Situated on Central America's Pacific coast, this country borders both Guatemala and Honduras. The Spanish language is the country's official language.

Panama's population is 4,314,767 people. The capital of Panama is Panama City. The country borders Costa Rica and Colombia, which is the northernmost country in South America. It also touches the Pacific Ocean and the Caribbean Sea. Spanish is Panama's official language.

With a population of 397,628, Belize is by far the smallest country in Central America. Belize shares borders with Guatemala and Mexico. Its capital city is Belmopan. English is the official language of Belize, making it the only South American country where Spanish is not the official language.

Central America is known for its biodiversity, which is part of what makes parts of the region popular destinations for tourists. It's a major destination for birdwatchers, as many migratory birds travel through the area during the spring and fall months. The terrain is also breathtakingly beautiful, with everything from beaches and coral reefs to tropical rainforests, volcanoes and mountain peaks. Visitors enjoy many activities, such as snorkeling, SCUBA diving, sunbathing, touring ancient Mayan architecture and ruins, taking in scenery, and much more.

Are you inspired to visit the region now that you're familiar with the Central American countries? It's certainly a beautiful place to visit. Unless you plan on staying only in Belize, where English is the official language, be sure to brush up on your Spanish before planning a trip to the area. Start by getting familiar with 100 common Spanish words. Then, learn some useful travel phrases in Spanish. Doing so will improve your ability to communicate with locals and interpret signage, which will help ensure you have a great trip.