Marsupials are a specific type of mammal. The common trait that distinguishes marsupial animals from other mammals is that they nurse and nurture their newborn babies, called joeys, in a pouch after they are born. Discover which types of animals are on the marsupial list and learn some basic facts about them. 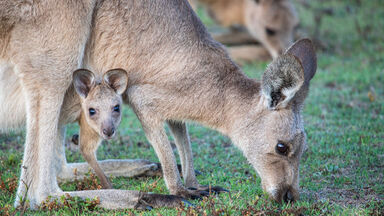 In addition to finalizing the development of their young inside a pouch, marsupials share a few other common traits.

There are several kinds of marsupials, with multiple species within each type. There are more than 330 different species. Some keep joeys in their pouches for a few months, while others do so for a year or longer.

Bandicoots are relatively small marsupials that can be found in Australia and New Guinea. These animals closely resemble rodents in appearance. They can deliver litters up to four times each year. They can give birth to up to five joeys at a time.

Similar in appearance and size to a mouse, dunnarts are present throughout Australia. They feed at night, which means that they are nocturnal. They breed each spring. They can birth up to 10 tiny joeys in a single litter.

Gliders are not limited to Australia, though a few types live only there. Gliders can be up to 18 inches long, but many are smaller. They have parachute-like flaps between their hands and feet that allow them to glide through the air. They typically deliver just one to two joeys at a time. However, they go into heat every 29 days, so they can have many litters each year.

The largest of all the marsupials, adult kangaroos can weigh between 40 and 200 pounds. They are present throughout Australia. Females deliver one joey at a time. However, they can keep embryos in a dormant state so there is always one ready to move to the pouch once the previous joey has matured enough to leave it.

Koalas are sometimes mistakenly believed to be bears, but they are actually marsupials. They spend most of their time in trees, and so are considered tree-dwelling animals. They can weigh up to 35 pounds, but females tend to be much smaller than that. Koalas have one baby per breeding season (a year), but they don’t all breed every year.

Unlike other marsupials, opossums are not limited to Australia. They are present in North America, Central America and South America (the Americas). They are known for using their tails to hang upside-down from tree branches. Opossums can give birth to as many as 20 babies at a time. They typically deliver two litters each year.

Quolls were once found throughout most of Australia, but they are not common any more. Several kinds are endangered, and many can be found only in a few remote areas. Quolls can grow to more than four feet long from nose through tail, though not all varieties reach that size. Winter is their breeding season. Females can deliver up to eight joeys in a litter.

Numbats are an endangered species that’s native to Australia. They are sometimes referred to as banded anteaters, though their diet actually consists solely of termites. They are diurnal, which means that they are not active after dark. Numbats reproduce during January and February, typically birthing litters of four joeys one time during this timeframe.

Tasmanian devils are found only on Tasmania, which is an island that is part of Australia. They are an endangered species. They mate during March and April and typically give birth to and raise between three and four joeys. They can weigh up to 18 pounds when fully grown.

Wallabies somewhat resemble kangaroos but are smaller. They are able to breed year round, so there is not a single breeding season. They typically give birth to only one joey at a time. The swamp wallaby species has two uteruses, which allows these animals to have two pregnancies going on at the same time, in different stages of development.

Wombats can weigh up to 80 pounds. They are native to Tasmania and mountainous regions of mainland Australia. They can mate at any time, though most babies are born in the spring. They typically give birth to just one joey at a time, though twin births are not unheard of.

Is a Platypus a Marsupial?

Some people wonder if a platypus is a marsupial because their birthing habits are also different from other mammals. However, a platypus is not a marsupial. Platypuses are actually egg-laying mammals, as are spiny anteaters. There are no other known examples of mammals that lay eggs in existence today.

The rest of the mammals (other than marsupials and the two egg-layers) are referred to as placental mammals. This means their baby animals are ordinarily delivered only after fully developing inside the mother’s womb. There are thousands of mammals in the world. While mammals are on your mind, this is a great time to explore examples of mammals from around the world.