List of Norse Gods and Goddesses From Famous Myths 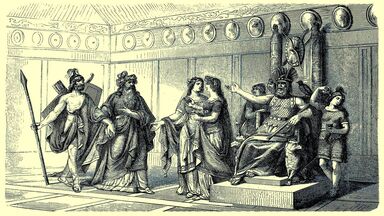 The Younger Eddas describe how the war between the two pantheons was resolved. Both sides spat into a kettle to declare peace and exchanged hostages. Odin went out with a great army against the Vanaland people; but they were well prepared, and defended their land; so that victory was changeable, and they ravaged the lands of each other, and did great damage. They tired of this at last, and on both sides appointed a meeting for establishing peace, made a truce and exchanged hostages.

The Æsir pantheon includes many of the most significant gods from Norse myths. The female deities of the Æsir are called Ásynjur. Here are some of the most important Norse gods and goddesses from this pantheon.

List of Norse Gods and Goddesses of the Vanir Pantheon

There are fewer famous Norse gods and goddesses of the Vanir pantheon, but three important ones figure in a number of Norse myths mentioned in the Eddas.

Norse Gods and Greek Gods: Are They the Same?

If you study literature, you’ll hear myths from around the world. Even though these stories come from different locations and cultures, they have much in common. Norse gods and Greek gods are not the same, but if you look at examples of Greek myths, you’ll find common ground between the two. Many of the Norse gods and goddesses share powers and qualities with their Greek counterparts.