We live in a big, wide world. With seven continents in total, there are 195 countries in the world. Of those, 193 are officially recognized by the United Nations, an organization that was established after WWII to maintain international peace. The remaining two are non-members known as observer states: Holy See and Palestine. These entities are invited to observe in various activities with limited participation. 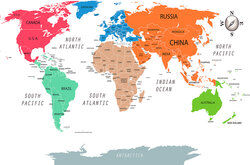 Ready to take a trip around the globe? Here's a complete list of all the countries in the world.

Africa is the second-largest and second most-populated continent (with Asia being the largest and most populated). According to Worldometers, the current population of Africa exceeds 1.3 billion across its 54 countries. Below, you'll find all the beautiful places to visit in this enormous continent, spanning over 11 million square miles. The capital of each of Africa's countries is listed in parentheses.

Now, let's explore the other side of the spectrum. Antarctica is the Earth's southernmost continent and a mostly uninhabited continent. In fact, 98% of the continent is covered in ice that's over one mile thick.

The total population here varies. In the winter months, you won't find much more than 1,000 people living there. In milder months, that number can swell to a little over 4,000. Interestingly, none of those people are full-time residents. Rather, they're mostly staff members at research stations.

There are no countries in Antarctica, as we saw above in Africa. Instead, there are eight territories claimed by other nations. Instead of listing the capitals in parentheses, we've listed the countries that own these islands:

Check out this article on geographic isolation. It discusses what happens when certain organisms are separated from exchanging genetic materials with other organisms.

Creating yet another contrast, let's move on to Asia. It's not only the most populous, but also the largest continent in square miles. Here, you'll visit many wonders of the world, from China to India and more. Asia encompasses over 17 million square miles with over 4.5 billion people in 53 countries (plus Palestinian territories). Let's take a walk through this beautiful land:

Asia abounds with opportunities for cultural diffusion. That is, there's a lot of color and culture that can easily be spread from one group of people to another.

Europe is one of the lights of the world, with famous cities like Paris, London, Venice, and Dublin. For all its treasures, Europe is actually the second smallest continent on the planet. The population here is approximately 743 million, encompassing 3.9 million square miles across 49 countries (plus the Holy See, or Vatican City). Here's a list of all the European hotspots, note that the Czech Republic officially changed it's short-form English name to Czechia in 2016 but the change is still taking time to be fully adopted.

North America encompasses the ever-popular United States, as well as several outlying islands like Aruba, Saint Lucia, and Martinique. Here, we're looking at over 9.3 million square miles and a population exceeding 580 million across a total of 41 countries.

North America partakes in globalization day in and day out. That is, it integrates itself with economies and cultures across nearly every continent. You can learn more here.

Oceania is an interesting corner of the world that lies between Asia and the Americas. Popular hotspots here include Fiji, Australia, and New Zealand. In terms of square mileage, Oceania is the smallest in size, coming in at 3.292 million square miles of land. It's also the second smallest in population, after Antarctica, with a little over 41 million residents in 33 countries.

South America is a beautiful continent that comes to a distinct point at the bottom, called Cape Horn in Chile. In terms of size, it's about 6.8 million square miles with over 430 million residents and 14 countries. This is a breathtaking continent, filled with several natural wonders in places like Peru and Brazil. Here's a closer look:

Where Will You Go Next?

Which country's at the top of your bucket list? Will you be a wild adventurer and join the ranks of the 4,000 visitors in Antarctica? Or how about a week in Oceania's French Polynesian islands? Wherever you go, arm yourself with these examples of geography terms. They'll help you navigate all the archipelagos of your dreams, as well as every canyon, river, and cove you happen to come across.