The Roman Empire was a powerful and fearsome global force for over a millennium. Its rising marked the end of the ancient Roman era, and its fall gave birth to the European Renaissance. Nearly two hundred emperors ruled the Roman Empire during this period, some more successful — and famous — than others. Take a look at a list of Roman emperors from 27 B.C. to A.D. 1453. 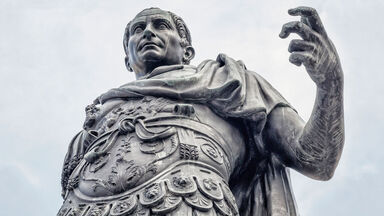 The Year of the Four Emperors

After Nero Claudius Caesar committed suicide in A.D. 68, the Roman Empire experienced a brief period of unrest. It saw four emperors ascend in a 12-month period, three of whom were dead before the end of 69 (Galba and Vitellius were killed shortly after taking power; Otho committed suicide after being defeated by Vitellius). Vespasian, the final emperor of this period, reigned for ten years and became the first emperor of the Flavian Dynasty.

The Flavian Dynasty held power for nearly 40 years at the end of the first century. Emperor Titus, son of Vespasian, was in rule during the eruption of Vesuvius in A.D. 79. His brother, Domitian, remained in power for 15 years before his assassination brought Marcus Cocceius Nerva forth as emperor.

The first five emperors of the Nerva-Antonine Dynasty are historically known as the Five Good Emperors. They were believed to be less oppressive and more moderate than previous Roman emperors. Many considered this quality to be shared among the Five Good Emperors because they were all adopted, not blood heirs to the throne, and chosen for their benevolence rather than military loyalty.

The Year of the Five Emperors

After the Five Good Emperors came the Year of the Five Emperors, where five different men competed for power after the murder of Commodus in A.D. 192. Pertinax was chosen but quickly assassinated; his successor, Didius Julianus, was executed in less than three months by Septimus Severus, who had claimed the title for himself. Pescennius Niger and Clodius Albinus also claimed the title of Emperor after Pertinax was killed, but were not accepted by the Senate.

The civil war that had arisen during the Year of the Five Emperors came to an end with the Severan Dynasty. The emperors were strongly influenced by the empresses of this dynasty (known as the Julias of Rome). This line of emperors would be the last of the Principate, which ended with the murder of Alexander Severus by Maximinus Thrax.

The republic of the Principate gave way to the despotism of the Dominate period, in which emperors seized power through violent means and lost it just as quickly. These leaders were more authoritarian and autocratic, hence the name Dominate ("to master or control"). Keep reading for a list of the Roman emperors of the Dominate period.

The Crisis of the Third Century

The Principate ended with the Crisis of the Third Century (A.D. 235-284), in which political instability and unrest threatened to destroy the Roman Empire. It included the Year of the Six Emperors in A.D. 238 in which five emperors were killed in rapid succession, before a series of emperors who only held power until someone could take it away.

When Diocletian was declared Emperor in A.D. 284, the Roman Empire changed forever. In A.D. 293 he declared that the Roman government would be ruled by two emperors (augustuses) and two junior emperors (caesares). This resulted in multiple emperors in the same time period, and ultimately, the territorial split of the Roman Empire into East and West.

The Four Tetrarchs are known as Diocletian, Maximian, Galerius, and Constantius I. The first two emperors were appointed Augustuses while the second two were Caesares. Galerius would eventually rule as Augustus until A.D. 311, after which a power struggle would ensue over his throne. Constantius would later begin the great Constantinian Dynasty.

Constantine I, son of Constantius I, reigned for 30 years during the fourth century. He was responsible for converting the Roman Empire to Christianity. Constantine I also founded the city of Constantinople in Byzantium, laying the groundwork for the Byzantine Empire. His three sons, Constantine II, Constans and Constantius II, would rule for over 20 more years.

Also known as the Valentinianic Dynasty, this line of emperors mainly oversaw the western regions of the Roman Empire. Galla, daughter of Valentinian I, married Theodosius the Great, emperor of the eastern territory. The short dynasty ended when two usurpers, Magnus Maximus and Eugenius, managed to take power in the West with Senate approval.

The Theodosian Dynasty was the final dynasty of the Roman Empire. Theodosius I was the last emperor of the united Roman Empire; his sons, Honorius and Arcadius, took control over the western and eastern regions of the empire after his death. From that time on, the Roman Empire would always be split and ruled separately.

The Rise of the Byzantine Empire

In the early Middle Ages, the power of the Roman emperors had a resurgence. It was inherited by the monarchs of Italy and later Germany, known as the Holy Roman Emperors. Charlemagne was the first emperor of the Holy Roman Empire, which stretched through Western and Central Europe, from A.D. 800 to 814. Notable Holy Roman Emperors included Otto I of the Ottonian Dynasty (A.D. 962-973), Charles V (A.D. 1519-1556) and Francis II (A.D. 1792-1806), who was the last emperor before the fall of the of Holy Roman Empire in the Napoleonic Wars.

The Historical Influence of Rome

The Roman Empire stretched both across the globe and through many eras in world history. Understanding the dynamics of these emperors can help us understand why current countries have the borders — and the histories — that they have today. For more stories from the past, check out a list of major time periods in history. You can also compare Greek and Roman gods and goddesses in your study of classical Roman culture.