Main Difference Between Osmosis and Diffusion in Biology

Cellular particles are always coming and going. But which way is coming, and which way is going? The answer lies in knowing the difference between osmosis and diffusion. Keep reading to learn more about these processes with explanations and examples of each in biology. 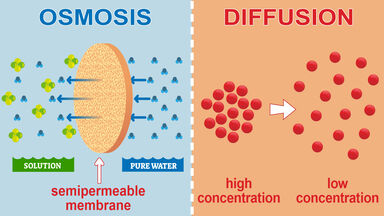 difference between osmosis and diffusion
Advertisement

The Difference Between Osmosis and Diffusion

Osmosis and diffusion have similar definitions in biology. Both processes involve spreading particles from one area to another. But see if you can tell the difference:

According to these biological definitions, osmosis is a form of diffusion. While diffusion can occur across areas that don’t involve a semi-permeable membrane, osmosis takes water in or out of a cell based on the concentration of surrounding water. They each have different purposes as well:

Examples of Osmosis in Biology

Because water is the source of life for nearly every biological organism on Earth, osmosis affects all living things. It ensures that cells have enough water, but not too much water, and that organisms are properly hydrated. Salt can affect osmosis as well, as water molecules tend to move toward salt in an effort to equalize hydration.

Here are some common examples of osmosis found in biology:

Without osmosis, much of life on Earth wouldn’t be able to continue. But technology has been able to mimic osmosis in important ways. Desalinating water through reverse osmosis (reversing osmotic pressure to remove salt from water) creates drinking water for populations without large water supplies. Another technological advance is a renal dialysis machine that purifies blood by allowing toxins to filter out.

Examples of Diffusion in Biology

Think of spraying perfume in a closed room. At first, only you can smell it – but in a few minutes, the particles have spread throughout the room and everyone can smell it. This is a form of diffusion.

Biological diffusion works the same way in the human body, in animals, and in plants. It allows cells to remove waste, receive nutrients and energy, and keep the organism running efficiently. Here are some examples of diffusion:

The rate of diffusion depends on the surrounding temperature, the permeability of the membrane, and the density of the particle. An organism’s need to diffuse nutrients or waste also depends on its current state, as a wilted plant may diffuse light more quickly than a healthy plant.

Biological life depends on equilibrium, and most biological processes are designed to preserve that natural order. Plants and animals depend on transport processes such as osmosis and diffusion to stay alive, but they’re not the only types of biological transports. Check out an article with examples of both active and passive transports in plants and animals.