Main Difference Between a Population and a Community

The terms "population" and "community" are frequently used in the field of Biology. As a result, students often wonder, "What is the difference between a population and a community?" Discover what each term means and how they differ, as well as the roles they play in the larger context of ecosystems. 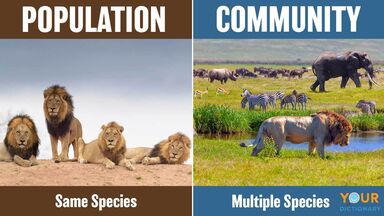 It's important for science students to understand how populations and communities differ from one another.

What Is a Population?

In biological terms, the word population refers to all of the organisms from the same species that live together in the same general geographic area, which is called a habitat. Organisms within the same population share a gene pool, but are not necessarily closely related.

For example, a population is not as narrow as a specific pride of lions. Instead, it could be all of the lions that live within a certain region, such as a particular forest or preserve.

What Is a Community?

For example, the community of the forest or preserve would consist not only of the population of lions that lives there, but also the populations of other big cats, antelopes, zebras, and other organisms existing within the same space.

How Do Populations and Communities Differ?

Similarities Between Populations and Communities

For a broader perspective on populations and communities, take the time to learn about ecosystems, as they are the context in which populations and communities exist. An ecosystem is a community of organisms that interact with one another and the environment (habitat) in which they exist. Ecosystems include biotic (living) factors, such as plants and animals. They also include abiotic (nonliving) substances, such as air, dirt or water.

Review some natural ecosystem examples in Biology for additional insights into how populations and communities differ from one another, as well as a deeper understanding of their role in the natural world.

Learn More About the Natural World

It's important for people to understand how populations and communities join together within habitats to form ecosystems. This knowledge is essential in developing a foundational understanding of how living organisms coexist and interact with one another in the world around you.

Start building a solid understanding of life science by learning key characteristics of living things. From there, explore how scientists use a taxonomy to classify living things. Next, study some of the many species examples in the plant and animal kingdoms. Build on what you learn by exploring some keystone species examples. You'll be on your way to becoming very knowledgeable about the field of science and how it relates to the natural world.