Atoms are all around you. You are even made of atoms. However, in order to make compounds, atoms must bond together. It’s like teamwork. However, not all chemical bonds are created equally, as you will see in the case of ionic vs. covalent bonds. Explore the difference between ionic and covalent bonds by looking at each different bond and how it forms. 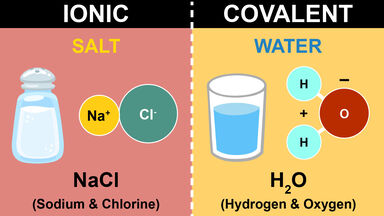 difference between ionic and covalent
Advertisement

What Are Ionic Bonds?

Do you use table salt? If you don’t, you’ve definitely eaten it with a McDonald’s burger or fries. Table salt is created from an ionic bond. Ionic bonds form when two oppositely charged atoms (called ions) trade their electrons (negatively charged particles) to create a secure bond between the two. Most often, you’ll see this bond happen between a metal and nonmetal.

Example of an Ionic Bond

The positively charged sodium ion (Na+) will form a bond with the negatively charged chloride ion (Cl-) to create sodium chloride (NaCl) or as many call it, table salt. You might not have realized Paula Abdul's famous “Opposites Attract” song was based on chemistry!

The key thing to remember in an ionic bond is that those electrons are traded to create balance between the two ions (hence the ionic bond). However, these bonds will dissociate into ions in water. This happens when you create saltwater.

What Are Covalent Bonds?

Covalent bonds aren’t all about trading like their ionic counterparts. Rather, covalent bonds are created when atoms share their electrons. It’s kind of like kindergarteners sharing their playing cards on the playground. You both need it so rather than go without it, you share it instead. Covalent bonds happen between two nonmetals.

Example of a Covalent Bond

Since covalent bonds are just sharing their stuff, they aren’t as solid of a bond as ionic bonds. You’ll also see these as a gas or liquid rather than a solid like ionic bonds. But while covalent bonds might be a little weaker than ionic bonds, they can form between the same elements. The more you know.

Difference Between Ionic and Covalent Bonds

When you look at the different bonds, the difference between ionic and covalent bonds is clear to see. However, just in case it isn’t, check out a table to bring those differences to light.

Similarities in Ionic vs. Covalent Bonds

Ionic and covalent bonds are fundamentally different in the way they are formed. One shares, and the other trades. However, by doing this, both bonds create elements that are neutrally charged making them stable compounds. Additionally, both bonds focus on the electrons. So, while they are different, ionic and covalent bonds have a few similarities.

Looking at Ionic vs. Covalent Bonds

Atoms like to be stable, and that is a good thing. Why? Because you need chemical bonds to form to create matter. Otherwise, you have lots of atoms and that’s it. Two important chemical bonds are ionic and covalent bonds. Now that you know the difference between these two bonds, learn more about chemistry and compounds through examples of organic compounds.