Major Types of Music From Around the World 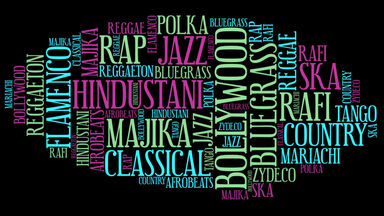 Word cloud of types of music around world
Advertisement

Top Music Genres in the World

An exhaustive list of musical genres from around the world is nearly impossible to create because there is no universally accepted way of classifying types of music. However, these are the top recorded music genres in the world.

African music can vary widely by region, but common instruments include drums, musical bows, xylophones, and rattles. Music and dance go together in many African cultures and help mark important life events while bringing communities together.

Traditional Asian music includes a lot of flutes and pipes, drums, and unique stringed instruments. The traditional approach to music in many Asian countries was scientific, or methodical. Modern Asian pop music keeps the simplicity of traditional music, but adds modern appeal.

Popular and common types of music in Latin America and South America are often referred to as Latin music. Traditional and modern Latin music often feature upbeat tunes, are heavily influenced by a variety of cultures, and include complex rhythms.

Music to Move You